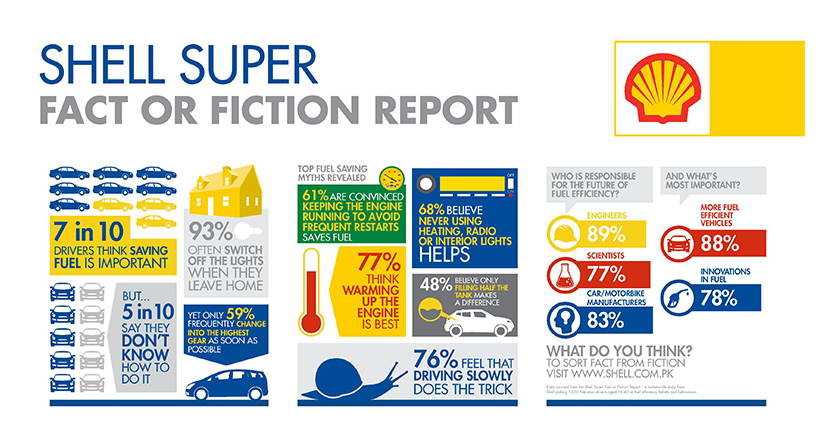 Shell Pakistan conducted a survey to assess how Pakistani drivers view fuel efficiency and the steps they take to bemore fuel efficient. Entitled ‘The Shell Super Fact or Fiction Report’, it is the first survey of its kind conducted in Pakistan with a survey size of a whopping  1,000 respondents aged 18 – 40 years.

The survey highlighted some key insights including the fact that although 71 % respondents considerd fuel efficiency to be important, 53% did not know how to actually succeed at it. With the rise in motorists on a yearly basis in Pakistan, the survey dispells some commom myths and educates on the proper ways to achieve fuel efficiency. The correct choices will have a long term impact on the environment and create a positive impact on the future of energy.

But wait, what is fuel efficiency? Google the phrase and it gives you:

‘The capacity of an engine, especially that of a vehicle, to obtain energy from fuel.’

Pakistani drivers were asked if they use a variety of common practices to be more fuel efficient. Some of the responses to the survey were quite interesting.

The survey brought to light a number of practices drivers use to be more fuel efficient that actually don’t improve fuel economy.

For instance, drivers believe that warming up the engine, or revving it before they begin to drive makes the engine more fuel efficient while others think that driving slowly does the same trick. Some even believe that refraining from using the heating, radio or interior lights in their cars will help them save fuel.

Well it seems that many lack the knowledge of how to make fuel efficient choices – kudos to Shell for doing the survey.

Shell Pakistan will soon be launching a campaign to educate users on how using Shell Super, combined with some small changes in their driving behavior, can lead to better fuel economy.

See the results of the survey below: