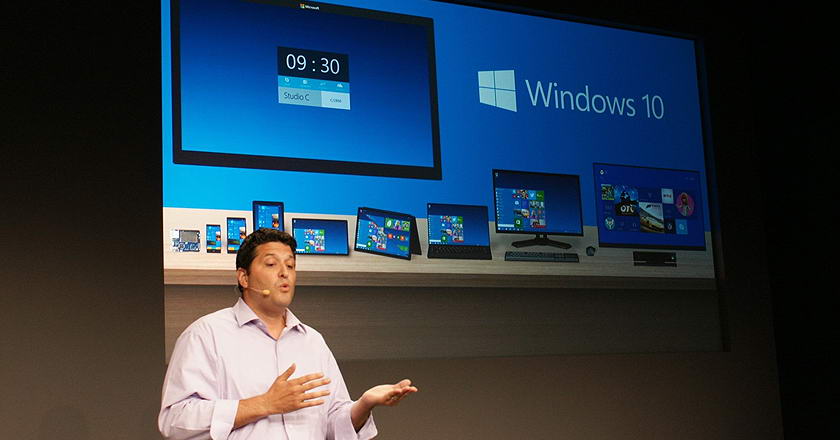 Microsoft has been minting macro numbers because of its innovation and continuously updating technology. Microsoft on 21st January 2015 revealed its new operating system, Windows 10 which will hit the market later this year.

The users of Windows 7, 8 and Windows Phone will be given the privilege to update their operating system to Windows 10 free of cost but it will be limited to first year of Window 10’s public release.

The corporate vice president, Joe Belfiore in the event introduced the key features of Windows 10 which will make the consumer experience better.

The Windows 10’s operating system will be common among all electronic gadgets like, PCs/tablets, mobile phones and the firm’s Xbox games console rather than different one for each type.

The start menu’s size could be increased to fit the screen by clicking on the top edge of the menu. This will make the usage of the electronics more comfortable to the eyes.  Surfing through the menu can be customized by pining and unpinning tiles.

Furthermore, the tiles and start menu’s color could be changed, re-sized to the tile size and the live updates of the applications could be turned off.

The Action Center in Windows 10 can be accessed by clicking on the Start taskbar and functions similar to the action center in the Windows phone.

The user can choose the applications he/she wants to receive notification from, and activate Wi-Fi and other feature by just one click.

The Windows 10 will feature Cortana, the intelligent digital voice assistant for PC users which was previously only a feature of Windows Phone.

Cortana will also be responsive to typed rather than just the spoken requests.

The software could carry out common commands like bring up PowerPoint presentation documents, locate photos taken during a specific month, dictate and send emails; and interesting commands like, tell the user whether or not the weather forecast indicates they should wear a coat later, show where their car is parked.

Continuum Feature of Microsoft was also demonstrated which will make it easy for users to switch between touch and non-touch interfaces i.e from Modern UI to the desktop and will be activated when the keyboard is connected or disconnected.

This was mainly introduced to counter one of the major criticisms of Windows 8 which was the difficulty of switching between traditional desktops and interfaces designed for touch.

The successor to Internet Explorer, codenamed Project Spartan was officially announced and demonstrated at the event yesterday by Joe Belfiore.  It was further highlighted that the users will be able to access Xbox One video games by streaming from the console to any other device with Windows 10 operating on the same Wi-Fi connection. This would mean users can switch devices and still be able to use the functions of other devices.

The new web browser will also support the core value addition of Windows 10 that is the automatic customization of the interface of the apps running across different devices.

Spartan will also make use of Cortana and provide information like directions to a restaurant whose website is being looked at. Another new feature of the browser called “noting mode” which will let users share typed information with others increasing platforms of communication.

The interface’s design has also been given a refreshed look, with flattened chrome around applications, Skype integrated Messages App and a fully-adjustable keyboard among other minor changes.

New Universal Applications were also introduced which will allow the cross-linking of applications amongst Windows Phone, tablet and PC. It will give a push to the cloud centric approach aided by One Drive. Outlook will have common look across all devices and will feature short-cut touch commands like swiping to delete and flag a mail.

Windows Phone will include free and already installed Microsoft Office. The Photos App’s photo albums will also be automatically updated across all devices removing duplicate and burst photos. A Person App will update and collect contacts and the Maps have also been updated to store parking locations.

The Xbox experience will be enhanced and improved for Windows 10 and Xbox One users with a built-in App, which was announced by Phil Spencer, Head of Xbox at Microsoft yesterday at the event. The Fable Legends Players on Windows 10 will allow the Xbox One users to interact with each other but this might be limited to local networks only.  A new Windows key + G keyboard shortcut will save snapshots and 30 second video clips of traditional PC games or Steam. This content will be brought into the Xbox App to share it regardless of the functionality support.

Phil Spencer also officially announced the anticipated performance-enhancing DirectX 12 gaming API which according to him will improve the games’ performance by 50 percent.

Windows 10 was not the only star announcement of the event as Microsoft introduced and flaunted its two futuristic devices.

One of them was the Microsoft Surface Hub an 84-inch 4K touch screen tablet with multi-touch and multi-pen support, dual camera, and advanced sensors. The Surface Hub will be an expensive electronic product and will function as a hub for communication for business collaborations.

The second major product was the Microsoft HoloLens augmented reality headset for holograms, three dimensional images. The HoloLens will have advanced sensors to make the experience close to reality and will pick up location information. The built-in CPU and GPU will aid the data processing from the head set.

However, with futuristic devices and a new operating system on the plate, Microsoft has proven that it has the potential to take technology to a whole new level and into the future before future actually happens.