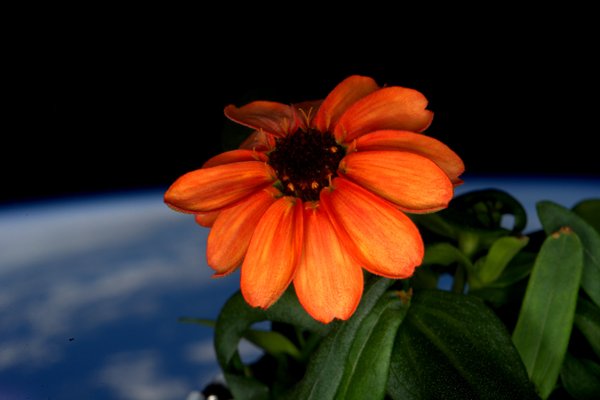 A bright orange zinnia has blossomed aboard the International Space Station, marking a first in space.


“First flower even grown in space makes its debut,” US astronaut Scott Kelly wrote on Twitter, with a photo of the flower.

Zinnias grow easily on Earth and blossom in abundance in summer. But on the ISS, where they were taken to carry out experiments, they have had trouble adapting to microgravity.

Several were doing poorly back in December as mold grew on some of their leaves because of high humidity, NASA said.

But Kelly was seemingly able to nurture them back to health.

Growing such flowers — zinnias are edible — is part of a long-term NASA project known as Veggie.

It is designed to produce food with an eye to long, manned missions to Mars. Such autonomy is key to astronauts’ survival in space, NASA says.

Crew on the ISS have already grown and eaten lettuce last year aboard the orbiting craft and hope to produce tomatoes by next year.

Growing vegetables on the space station began in mid-2014. They are grown aeroponically — without soil, in an air or mist environment. The system requires much less water and fertilizer, and plants grow three times faster than on Earth, NASA says.

Gioia Massa, a scientist working on the Veggie project, said the plants grown so far are not perfect but have helped researchers on Earth understand better how they grow in conditions of microgravity.