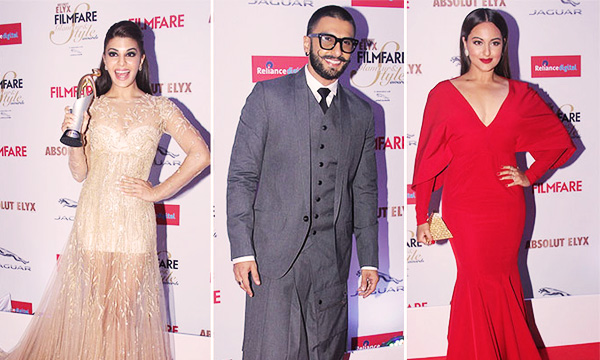 The Filmfare Glamour and Style Awards night was brimming with the chic and mystic stars from the Bollywood industry. The gala night, held on November 30th at the Taj Land’s End was a star-studded event, looking chic in their glamorous outfits!

Fashion has become the core game of the Indian cinema fraternity over the years, as style has penetrated majorly in the movies as well as the lives of these celebrities.

The event was studded with scintillating music performances while the event was hosted by the regal Neha Dhupia. Let’s have a look at what some of the popular celebrities wore when they graced the occasion. Wearing @georgeschakraofficial styled by my love @stylebyami @shnoy09 #AbsolutElyxFilmfareGlamourAndStyleAwards A photo posted by Alia (@aliaabhatt) on Nov 30, 2015 at 10:40am PST Sonam rocked the red carpet look in a hot pink gown! Some might critique the dress due to the many velvet laces used, I personally liked the adorable glam she had going on.

Check out the two ladies walk the red carpet in style: Athiya Shetty donned a sexy black gown on the red carpet and exuded much poise and elegance. Rekha looked graceful as always on the red carpet wrapped in a gracefully gorgeous saree. The Bajirao actor pulled off a grey man-skirt on the red carpet and managed to look even sexier than before! Shah Rukh Khan kept it simple as always; slipped on a sleek black suit, the King Khan looked quite dashing on the red carpet.

The heartthrob, Varun Dhawan looked quite the ‘hottie’ on the red carpet. He looks sexy doesn’t he? The elegant host of the evening gorgeously donned a smoking black attire and graced the gala night with much poise.

Whose look did you like best? Let us know in the comments below!