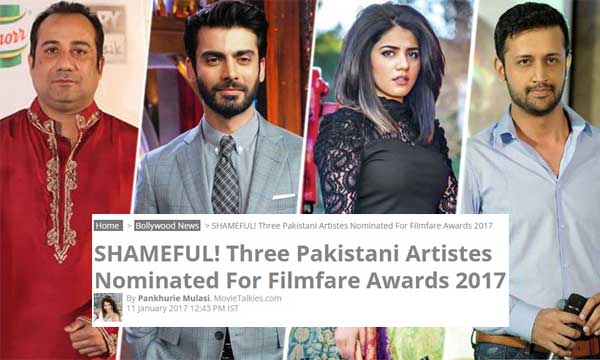 Bollywood’s most acclaimed award show, Filmfare Awards 2017 shocked the entertainment fraternity of both India and Pakistan by nominating Fawad Khan, Atif Aslam, Rahat Fateh Ali Khan and Qurut-ul-Ain Baloch despite the ban on Pakistani artists.  Just when the world thought that the tensions between the nations might be taking a step back, the nomination list got everyone riled up again.

Rahat Fateh Ali Khan has been nominated for his song ‘Jag Ghoomya’ from the movie ‘Sultan’. QB made it to the list for ‘Kari Kari’ in the movie Pink. But Bollywood is not happy with the announcement that 4 Pakistani artists are a part of one of India’s most prestigious award ceremony.

It is reported by Bollywood Hungama that a celebrated Indian filmmaker has protested against the nominations and said that he would be skipping this year’s ceremony out of respect of the Uri attack martyrs.

“It’s a matter of self-respect. We are not welcome in Pakistan. They brutally kill and maim our soldiers. And we behave as if our cinema can’t do without their artists? Kuch toh sharm karo (have some shame).”  did not name the filmmaker.

Bollywood Hungama kept the name of the filmmaker a secret.

Of course, Filmfare nominations have once again turned political rather than about acknowledging the artists!

The Filmfare Awards are considered the equivalent of the Academy Awards in India and South Asia in general so a nomination in itself is a pretty huge deal. Sadly, since the Uri attack things have heated up between the neighboring nations and every step towards peace apparently backfires.

While Pakistani stars have made it to the nominations, it is highly unlikely they will win any award after the aggressive backlash!