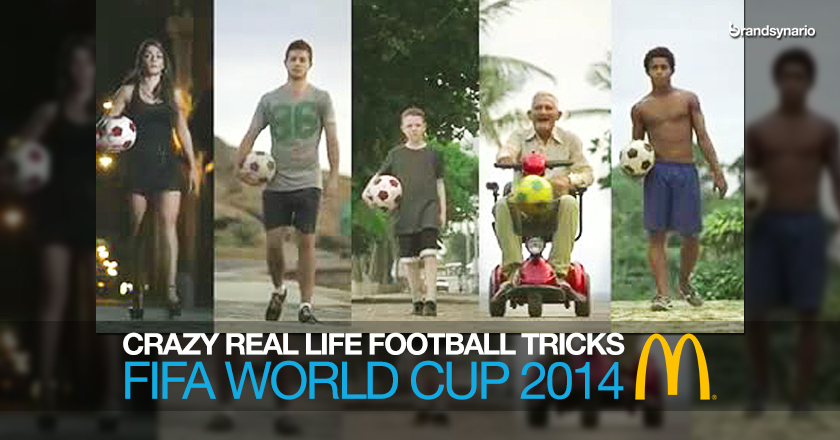 FIFA World Cup fever is ON and McDonald’s has made it even more awesome with their recent promotional activities.

The recently launched video by McDonald’s shows some of the perfectly executed amazing football tricks performed by everyday soccer fans from around the world.

These fans are caught on camera doing some stunning football tricks which one can only desire, the video doesn’t at all portray any kind of McDonald’s product promotions but instead solely focuses upon the promotion of FIFA World Cup.

These fans include players from all walks of life, i.e. from street children to Argentinian Model Fiorella Castillo to a super oldie football fan.

Shots displayed in the video are so ridiculously stunning that many thought of them being faked, while a spoke person from DDB, the agency behind this brilliant effort stated in defense, “I can confirm there was no CGI used on the film,” while further adding “It was definitely all trick shots by those people.”

The fast food giant has also rolled out a digital campaign ‘GOL’ for the very purpose of promoting the FIFA fever even more. The app entitled “McDonald’s GOL!” is available for downloading on Apple’s App store and also on Google’s Play Store, while it can also be downloaded at GOL.McD.com.

McDonald’s has been an Official Sponsor and the Official Restaurant of FIFA World Cup for 20 years. Other activities planned to bring the excitement of the Tournament to life worldwide include:

McDonald’s will provide 1,408 children (ages 6-10) from 69 countries worldwide a once-in-a-lifetime opportunity to experience the thrill of the Tournament and walk hand-in-hand onto the pitch with their football heroes

The fast food giant, who has been an Official Sponsor and the Official Restaurant of FIFA World Cup for 20 years will also provide some lucky fans from around the world with a once-in-a-lifetime trip to the

Customers selected as a McDonald’s Ultimate FIFA World Cup Football Fan will have the chance to attend matches, have their photo taken with the FIFA World Cup Trophy and get VIP treatment at exclusive parties during Tournament.