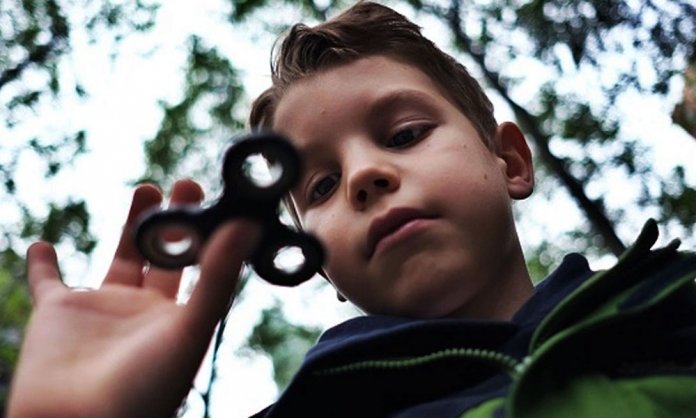 Fidget spinners have become the latest trend, with children going gaga over this new gadget!

However, some concerns regarding the safety of this latest toy have raised eyebrows and a lot of concern for parents.

Just recently, a case surfaced on social media, narrating a heart-wrenching story of a 4th-grader who choked to death on a fidget spinner. 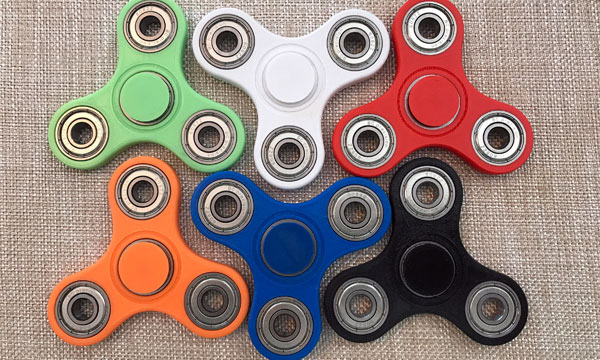 The story was published in a closed Facebook group, describing how a metallic part from the spinner got dislodged, hitting the child’s his throat and cutting through the tissue and jugular vein.

The boy had been playing with the fidget spinner while his siblings/cousins were around him. He had been laughing and had an opened mouth. Some metallic piece from the spinner dislodged during its spinning action. It hit his throat from inside the mouth and cut through the tissue and jugular vein. It took less than a second for this to happen. Although the poor kid was provided emergency medical care, the blood loss and possible retention of blood into the lungs caused his very sad demise

Read the complete story below 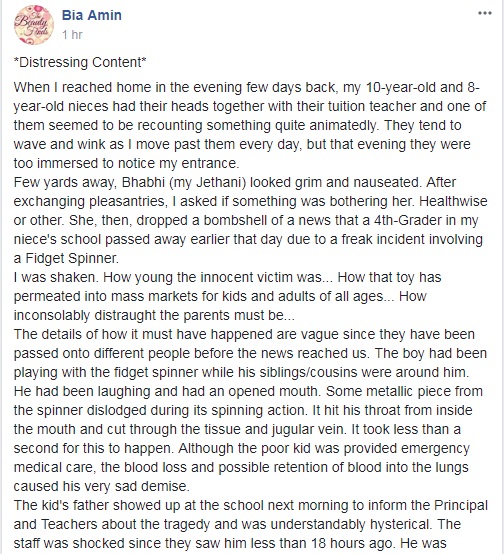 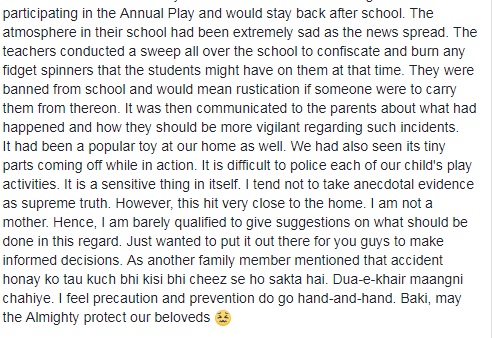 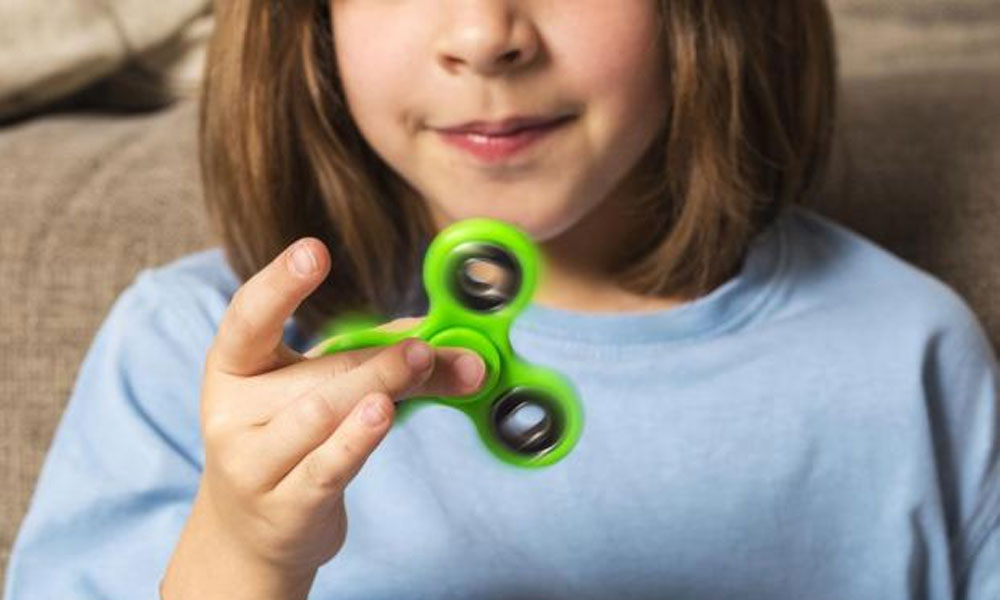 Even all over the world, various emergency Room (ER) cases have recently surfaced in which children were admitted, and the main reason behind these cases were fidget spinners.

Apparently, the spinner is equipped with small discs in each panel which are very small and result in children being chocked!

Earlier this year in Sydney, a young boy accidentally swallowed a disc with plastic.

His mother stated on a Facebook group called North Shore Mums, that her son’s terrifying ordeal happened just two days after he got the toy, adding she wanted to warn other parents of the dangers.

“Parents of fidget spinners beware … our son swallowed the disc of a fidget spinner last night & ended up at RNSH Emergency. The side of the spinner was cracked & when he spun it, the disc flew in his mouth & before he realized, he swallowed it! He had it for less than 48 hours.”– Mother of CHild

An X-Ray of the young boy was also shared. 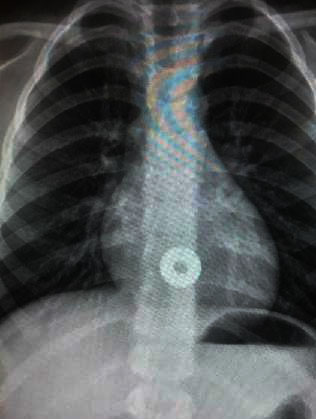 There was also another recent report of a girl who also swallowed a disc. The mother reports that she heard a weird etching noise coming from the back of the car.

“I heard Britton make an odd retching noise in the back seat as I was driving. Looking back in the mirror, I saw her face turning red and drool pouring from her mouth. She pointed to her throat saying she’d swallowed something, so I attempted Heimlich [abdominal thrusts] but there was no resistance. She said she’d put part of her fidget spinner in her mouth to clean it and somehow swallowed it.” -Britton’s Mother

An X-Ray of the young girl was also shared. 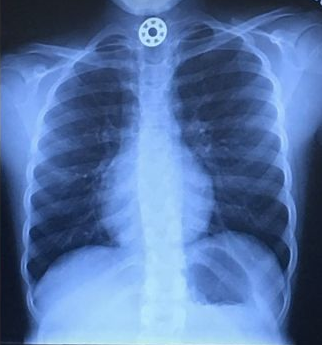 Countries are Imposing a Ban of Fidget Spinners 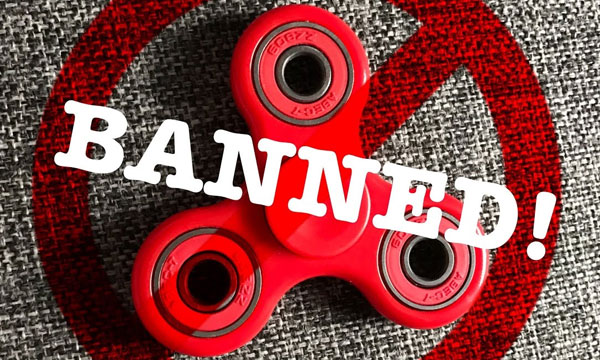 Taking the risks of these incidents into consideration, Germany has banned the import of fidget spinners.

An airport in Germany has taken a strong anti-fidget spinner stance by stopping 35 metric tons of the toys from entering the country in May.

Customs officials at an airport in Frankfurt said children could potentially choke on pieces that might detach from the whirling contraptions, and that they planned to destroy the seized toys.

How to Prevent Accidental Choking? 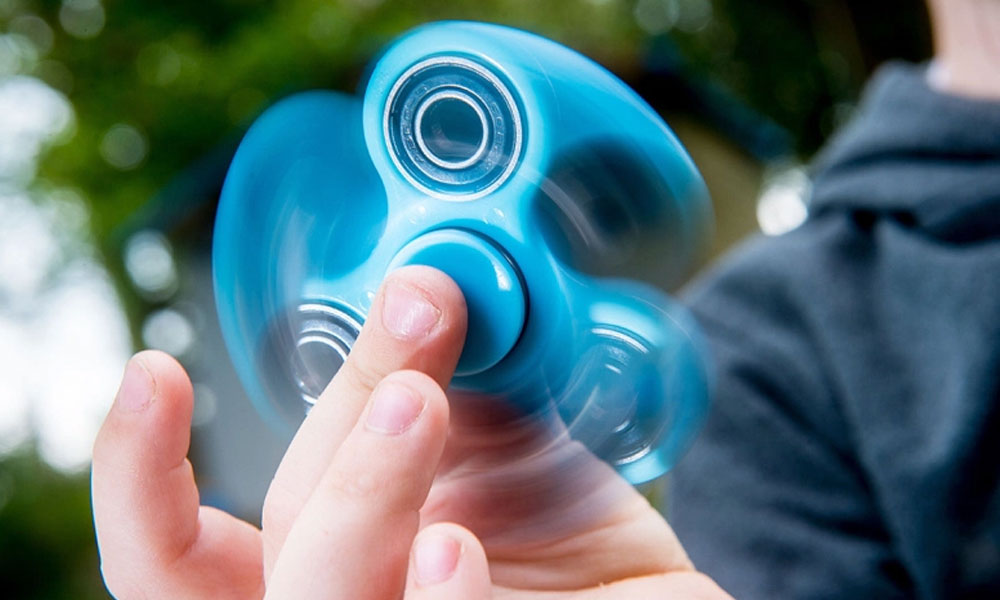 Parents, teachers, and guardians need to make sure that their child is old enough to carry a fidget sinner. Though the intended audience is children, the real question is are they old enough to have a toy which can dismantle?

An adult, teenager, or a pre-teen, might be more suitable, however, children from the age group of 3+ will always be at risk if they own a fidget spinner as children have a habit of putting things into their mouth.

Another alternative is to purchase fidget spinners which do not have the discs. There are spinners which have LED lights and some have different decorative bodies, which can prevent any small particle from flying into the child’s throat.

However, the risk of accidental plastic swallowing will always be present in both cases.

Will you be willing to let your child play with this hap-hazard toy?

DIY: How to Make a Fidget Spinner