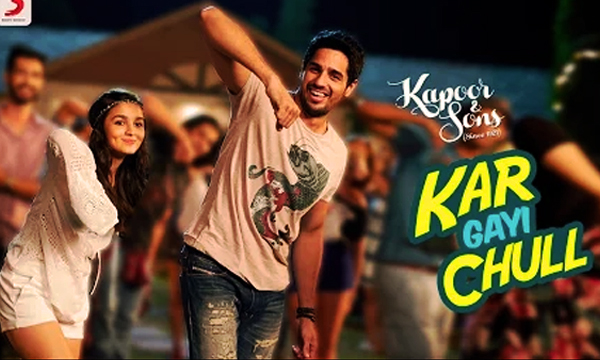 Alia Bhatt, Sidharth Malhotra, Fawad Khan starrer film Kapoor & Sons’ first song ‘Kar Gayi Chull’ has finally been released. The young and ever energetic actress Alia is seen dancing carefree, while her real life rumored boyfriend Sidharth Malhotra is seen looking at her with eyes which are full of love up to the brim.

Alia and Sidharth match their steps on the famous Punjabi number which has been sung by Badshah, Fazilpuria, Sukriti Kakkar and Neha Kakkar.

Alia looks pretty in a loose white tee and denim shorts with a head band in her hair and Sidharth is also casual in a tee and blue denims. The choreography looks good as the two groove on the number that will make you tap your feet as well. Fawad Khan has gone missing from the song, but we are sure that director Shakun Batra has something in store for him as well.