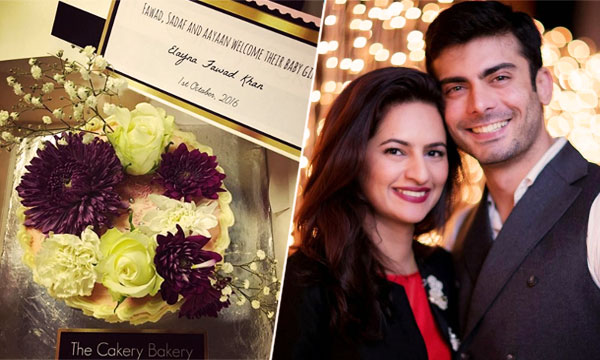 The handsome hunk Fawad Khan & wife Sadaf recently rejoiced at the one-month celebration of their adorable baby girl. The power couple welcomed their second child on October 4th, 2016 and have named her Elayna. ‘Elayna Fawad Khan’, now that has a nice ring to it!

No pictures have appeared on social media as of yet, however, we are dying to see the glimpse of the little angle. The couple had an intimate family gathering to celebrate the daughter’s one-month into this world at their humble abode in Lahore. Want proof? See picture below.

We are in love with #FawadKhan daughter's name #Elayna ❤😍❤ pic.twitter.com/1U929szBiF

A popular bakery made 112 fabulous cake for Fawad Khan and his family!

#TheCakeryBakery does it again! 😍✨ Here's a sneaky glimpse into the 112 fabulous cakes maestro #AroobaRizwan made for #FawadKhan and his family! @thecakerybakerylhr

This is also Fawad Khan’s birthday month. The charmer will turn 35 on 29th November 2016!

Recent clicks of #FawadKhan & Sadaf with friends 😊
FK is back to his beard look! sadaf looks so good pic.twitter.com/h7YkyrtkEn

The couple tied the knot on 12th November 2005 and have been happily married for 11 years now. The duo has a heart-melting love story- Fawad met his life partner when they were in college and it was love at first sight!

Fawad’s mesmerizing appearance in Ae Dil Hai Mushkil has dazzled his fans and some even went on saying that he looked better than Ranbir on screen. Even though Fawad’s screen time was shortened to 30 minutes, the actor managed to leave quite an impact. We love you Fawad!

What to you think of his daughter’s name? Let us know in the comment section below & stay tuned to Brandsynario for more news & updates.