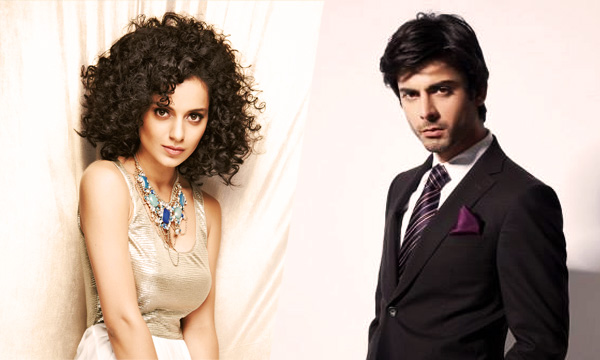 There has been major hype about the upcoming Bollywood Masala Drama, ‘Mr. Chalu’. Rumor has it that Kangana Ranaut will once again be taking up the project, replacing Priyanka Chopra, and will now be seen romancing the hottest Pakistani export, Fawad Khan in Bollywood.

The much-hyped flick, to be directed by Reema Kagti is in the pipeline for a really long time.

According to the Bollywood Buzz, Kangana was supposedly offered the role first but she backed out from the project due to unknown reasons.

Soon, the fashionista and the much-talented Priyanka was cast for the role. Sources report Priyanka was very keen on working with the Pakistani eye-candy, Fawad and immediately accepted the movie after hearing the script. However, it is reported that Kangana has been taken onboard for the movie once again. Even though we do not exactly know what happened but we guess that maybe Priyanka is busy with foreign projects and became unavailable.

Meanwhile, Kangna was re-approached for the movie and she accepted. The Pakistani heartthrob, Fawad Khan is reported to have replaced Saif Ali Khan as the lead main protagonist; however the director Reema was keen on casting the hunk, Fawad Khan.

It will definitely be interesting to watch Kangana Ranaut and Fawad Khan stun on the screen together! I think they’ll make an adorable couple. What do you think? ‘Mr. Chalu’ revolves around the deceitful womanizer who cons women by making them fall in love and eventually robs them off their money.  The ‘Humsafar Hero’ has also been signed up for ‘Kapoor & Sons’ with Siddharth Malhotra and Alia Bhatt.

Transitioning from the royal, old-school charmer alongside Sonam Kapoor in Khoobsurat, it will be excitingly challenging yet exhilarating to see Fawad Khan with Kangana Ranaut play a womanizer on the screens!

Good luck to Fawad Khan for the new venture!