Home Entertainment Celebrities Fawad Khan Takes Over The Internet As He Attends His Sister’s Convocation!
Advertisement 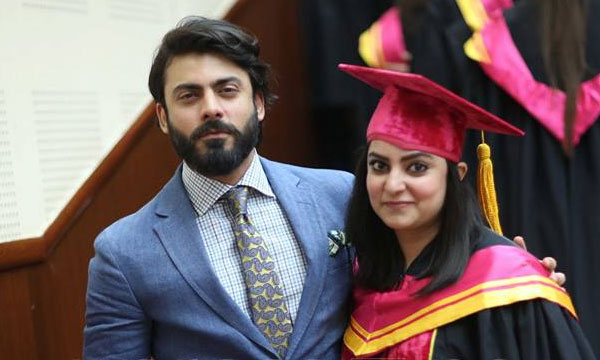 The internet just need a reason to discuss Fawad Khan! Sometimes it is his feats in Bollywood or his upcoming Pakistani movies. Other times it is some super hot photo shoot or a TVC he rocked in!

But this time it is his younger sister’s convocation and his appearance at the ceremony held at CMH Lahore Medical And Dental College that has social media on fire.

Khan was spotted flaunting his current heavy beard and beefed-up look! Donning a light blue suit and sassy shades, FK has become the talk of the town as his pictures with his sister have flooded the internet.

Of course, the superstar seized all the limelight at the ceremony!

Yeap, that is his sister! Congratulations to her.

And that is Fawad Khan’s mom, ladies & gentleman!

The lucky graduates seized the moment and took pictures on their big day with FK!

Well obviously, who would not want Fawad Khan to grace their graduation ceremony? We bet even the chief guest at the convocation would not have reaped as much spotlight as the hero!

We must admit that the class of 2016 is one lucky batch that graduated out of CMH! Cheers to all the pass-outs.