Bollywood might have ban Fawad Khan to star in its movies, but our Pakistani heartthrob has cast a forever magical spell on the tinsel town! Seems like the Khoobsurat King and his acting trysts will never be forgotten across the border.

Just recently, another Bollywood actress to join team Fawad Khan was the bubbly babe, Parineeti Chopra!  Seemingly, she could not not stop fangirling over FK

While having a tete a tete with Karan Johar on his iconic show Koffee With Karan Season 5, Pari divulged who she founds the sexiest man in India. Of course, it was our dreamboat, Khan.

Sharing the couch with her Dawat-e-Ishq co-star, Aditya Kapoor; the starlet was enjoying a rapid fire round on the show. When KJO asked Chopra who she thinks the sexiest man in India is, she promptly replied ‘Fawad Khan’! 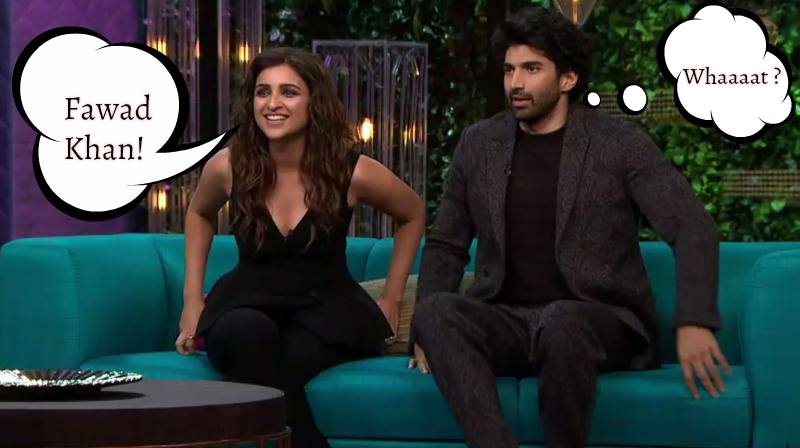 However, the good-natured beauty took the opportunity to make a funny jibe at Karan Johar and asked him if he’s still in India!

Of course, Johar being a good sport laughed it out loud!

The whole world knows how much KJO is fond of Fawad Khan. However, all the political hullabaloo between India and Pakistan gave quite a tough time to the director for casting him in Ae Dil Hai Mushkil!

Fawad Khan might have starred in just two films in India but he is undeniably the hottest property that conquered Bollywood in a matter of two years! We bet that not a single actor from the neighboring nation can compete with our hunk.

His successful acting trysts across the border and his sexy brooding looks are alone to put the whole of India on fire!

While he may be banned across the border, Pakistan will always love him to death!