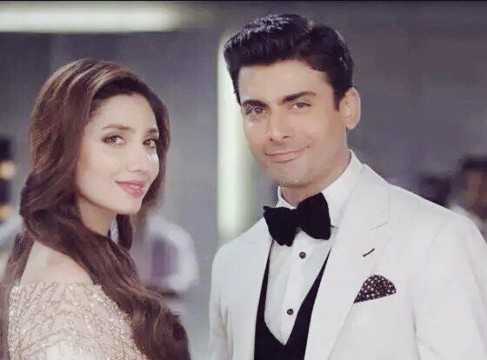 Fans of Fawad and Mahira rejoice! Both of our beloved Khans have united yet again after Humsafar- this time in a pomp promotion for the upcoming Lux Style Awards 2015.

After 4 years of their Hum TV Hit, the popular pair is seen back on screen in the glamorous advertisement. While both the stars managed to charm their audience by their magnetic appeal as a duo in the drama and even deemed themselves as Pakistan’s all-time  favorite couple, the 40 second ad revived their sizzling chemistry that their devotees always crave to watch!

Watch the BTS video below:

Like always, Mahira Khan looks stunning, young and fresh in her off shoulder glittery golden gown while Fawad appears innately suave, suited in a bow-tie and white jacket.

Together they invite the viewers to win an exclusive chance to witness the resplendent event of Lux Style Awards 2015. What’s more, rumors reveal that Fawad and Mahira might even be hosting the coveted ceremony this time around.

Their return on the screen as a duo has set the Twitter town on fire and their Indo-Pak fans are ecstatic to see them as a pair all over again.

The Queen Of Expressions Bollywood here she comes #MahiraKhan pic.twitter.com/7TRXxG3Fyi

THESE TWO!!!!! THEY ARE LOVE! #FawadKhan#MahiraKhanhttps://t.co/tFQmCdtvUX

The most awaited reunion, finally! 😍 So alluring! Overawe by their beautiful faces! ❤ #FawadKhan #MahiraKhan https://t.co/hfK1D6lfLk

The promotion marks Mahira Khan’s debut in a Lux endorsemnt, that too beside Pakistan’s Khoobsurat Khan, Fawad! Previously, the sultry model Imaan Ali featured beside Fawad in a Lux beauty ad.