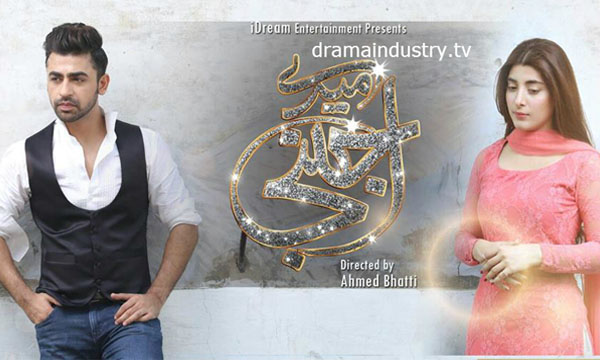 It can be said without a doubt that Urwa Hocane and Farhan Saeed are Pakistan’s ultimate Instagram couple. The cutesy, lovey-dovey pictures of the dating couple practically dominate the internet, showing us a sneak peak off their off-screen chemistry.

And now the real-life lovebirds Urwa and Farhan are all set to rock in their first drama together in ARY’s upcoming romantic tale “Mere Ajanbi”!

Seemingly, Urwa will be playing the role of the typical eastern girl, who is brimming with innocence and with the hope of meeting her Prince charming one day.

While she considers Farhan’s presence as a curse in her life, she is eventually smitten by the hero amidst the highs and lows of their love story. Previously, we got a glimpse of the couple’s chemistry in Farhan Saeed’s music video “Tu Dhori Dair”, where the ex- Jal singer plays the role of a newly-wed soldier who is compelled to abandon her bride, played by Urwa, for a call to duty.

What’s more, the dating duo made a dazzling appearance on the ramp of The Bridal Couture Week 2015. While Urwa is riding high on the success of her movie Na Maloom Afraad, Farhan has bagged the nomination for his hit-track “Roiyaan” as the Song of the Year in Lux Style Awards 2015.

Surely, it will be exciting to watch “Farwa” romancing each other as soulmates on screen! Let’s see if they manage to woo the audience with their magic and make their dramatic couple debut in Mere Ajanbi a worthy hit.