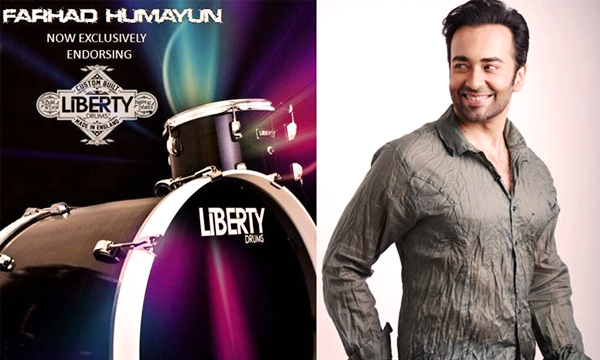 Pakistani singer Farhad Humayun is officially endorsing a British company, Liberty Drums. The deal has been struck for a period of three years. Farhad is the frontman and singer of Overload, a popular rock band in Pakistan.

Liberty Drums is building custom drums on specifications given by Farhad, in a combination of the highest quality woods from the world. The sound of each drum will be engineered to suit the style of music of the iconic drummer.

The ‘finish’ of the drum set is being designed by Farhad in collaboration with the owner/engineer of the company, Andrew Street who builds his own drums by hand.

The set will also bear Farhad’s name on each drum, uniquely customizing the instrument for the drummer in recognition of his art & popularity & his association with the company.

“It’s an honor when your hard work is recognized and rewarded. I am absolutely thrilled to be a Liberty Drum artist. I’ve played almost all brands of drums in the world but I’ve been looking for a drum that sounds like ME – A sound of drums that translates all the emotions I feel while playing music, and I’ve found that in Liberty.”

“I also feel that the large companies make products that are standardized but working with Liberty, I can hear so much character in the drums and Andrew’s craftsmanship is just immaculate”.