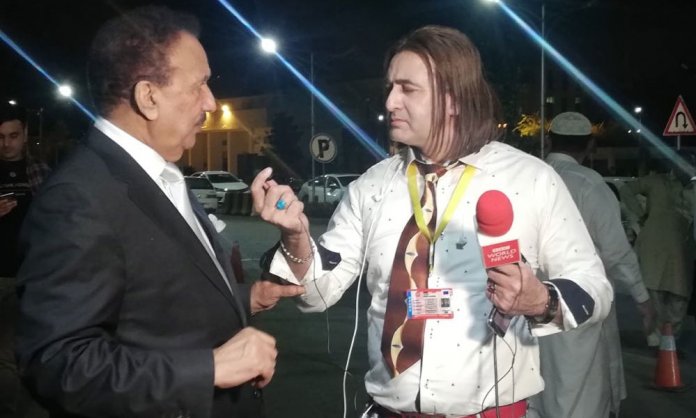 A man reportedly named Muhammad Waseem Ullah Siddique has been pretending to be a journalist from the renowned free-to-air television news channel BBC.

The imposter even took an interview of PPP Senator Rehman Malik in Islamabad, holding a BBC branded mic. The image of the man soon went viral on social media.

Meanwhile, Senator Malik shared that he had suspected the person while giving the interview. Furthermore, he has ordered an inquiry as to how and who gave that man access to the restricted area of the Senate.

“I have also informed the BBC head in Islamabad and sent him the interview, which shall be used as evidence,” the senator tweeted.

I have already ordered an inquiry as to how & who gave him the entry pass to the restricted area of Senate .hv also also informed the BBC head in Isb and sent him this interviews/ with other senators shall be used as evidence .i suspected him when on a Q he posed fromBBC Italy https://t.co/aACQCaOqSd

On the other hand, BBC’s Social Editor Tahir Imran Mian confirmed via his official handle that this man is not a BBC journalist.

“He works for some other publication and is using BBC’s name to ask for undue favors. Please always verify if you suspect someone is pretending to be a BBC journalist,” Mian wrote.

“This guy was pressurizing DPO Pakpattan who in turn asked for verification. When he couldn’t produce, he was asked to provide a story which was nonexistent so he was caught,” he added.

Another imposter warning.
This gentleman Waseem Saddique is pretending to be BBC correspondent. He is not a BBC employ, he never worked with BBC not he is associated in any way to claim this. pic.twitter.com/mWHVfryBhv

That’s not all, this man was also spotted at the JUI-F march!

Yes, that is where we caught him. Here he is in all his glory. pic.twitter.com/9dTYPte4He