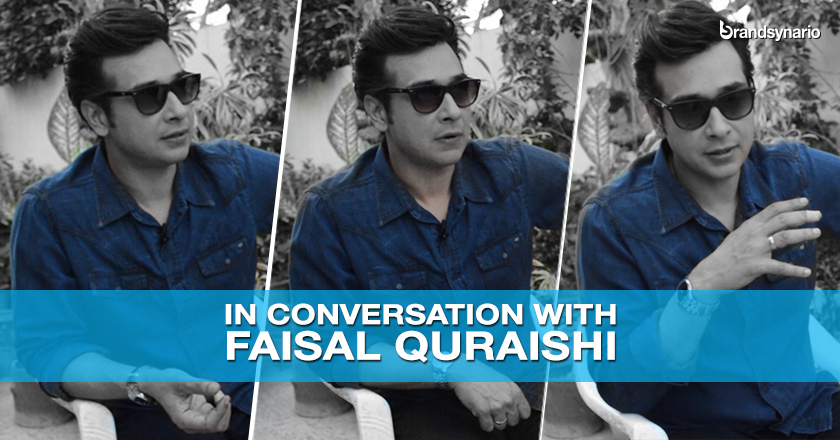 It’s not often that you meet a superstar; it’s even rare that the star turns out to be so humble that you end up changing your perception about the glittering industry altogether.

Busy with the shoot of his upcoming drama serial ‘Jao Tumhe Maaf Kia’, Faisal met our team and immediately won us over with his candid answers and amicable attitude.

The actor, who started working as a child artist, is currently winning the nation’s heart with his live game show –Jeet Ka Dum from HUM TV.  The pressure of live transmission combined with entering an already conquered field is challenging but like everything else – Faisal was all praises for his competitors.

To quote his own words, “Aamir is a phenomenal host. I salute him for his energy with which he carries out his long hour transmission every day.”

“His forte is hosting while I am an actor. For me hosting is all about having fun and spreading happiness.” He further added.

Speaking about his other counterpart he said, “I think Fahad and I would both agree that he (Aamir Liaqaut) is a genius. Be it religion or any other topic in the world – even movies, he can speak on any topic. For me there is no comparison with him.”

The 41 year old actor-host-producer- and a father is currently busy with his upcoming projects which include drama serials ‘Jao Tumhe Maaf Kia’ opposite Mawra Hocane, Mol for HUM TV, Aashiq Hussain for Geo and Jeet Ka Dum that airs every Thursday and Saturday at 9:10 PM.

Being the perfectionist he is, Faisal has turned down a few movie offers from Bollywood. In his own words, “I’ve had 2, 3 offers but the scripts wasn’t to my likening. I don’t want to disappoint my fans by doing that doesn’t live upto their expectation.”

Watch the full interview below to know what Faisal thinks about stardom, industry, competition and of course, cricket world cup 2015: