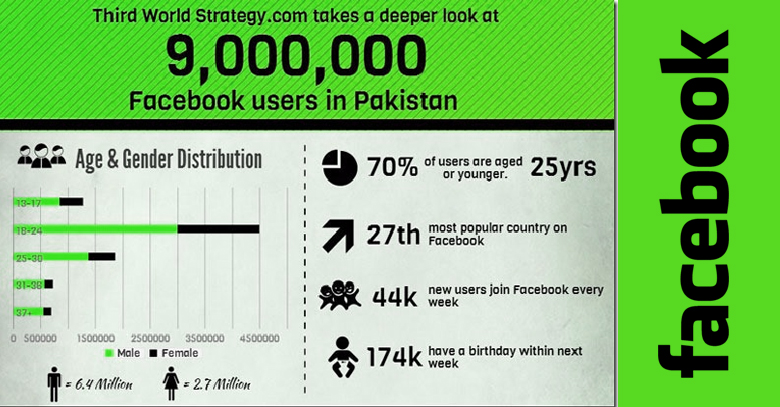 Social media has become an integral part of the digital marketing strategies. So far Facebook seems to the King of this growing platform.

Facebook helps the advertisers to communicate and connect better with their targeted customers. It maintains the demographic database of the users whichthey provide while making his/her Facebook account.

Thisinformation eventually helpsAdvertisers toeasilymark their required customer market and promote their services by the help of attractive ad campaigns, social engagements etc. The grandsocial media platform – Facebook is used by millions of people every day. It doesn’t stop here,in fact the circle grows by each passing year which ultimately provides advertisers with a wider spectrum which is cost effective and result-full, to market their products and services.

Pakistan made a striking increase in social media stream towards the end of 2012. Facebook users are increasing at a fast pace. Earlier this year the user count was 8 million (plus)andwithin only 6 months the social network broke the 9 million users mark. The enormous increase in users has put Pakistan on the 27th number in the classification of most popular countries that use Facebook.

Amongst the nine million users in Pakistan, statistics show that,the maximum number of Facebook users(3,990,800) lies in the age range of 18-24 and the second largest number of users lies in the age bracket of 25-35.

There are 6.4 million male and 2.7 million female users. The ‘thirdworldstrategy.com’ reports that nearly 39300 new Pakistani consumers join Facebook every week.It is being predicted that Facebook may cross the 10 million user boundary in Pakistan before the end of this year.