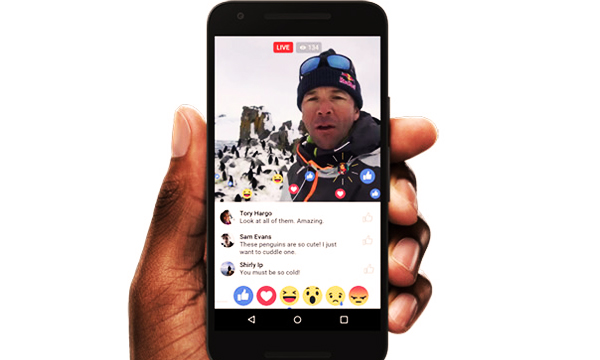 Facebook has made its live video streaming service available to everyone; it has brought an array of new features that permits people to stream live videos with family members and friends through smartphones and Facebook accounts via desktop. On Wednesday, Facebook ramped up its challenge to Twitter-owned Periscope with upgrades to the social network’s live video broadcasting feature.

“We hope this new ability to both broadcast and watch the live video within Groups and Events enables people to connect more deeply with their closest friends, family and the communities of people who share their interests,” Facebook’s Simo stated in the announcement blog post. People using the Live streaming feature at Facebook will be able to “broadcast: to groups at the social network or in scheduled “events.”

Scheduled events can even be used for online question-and-answer sessions.

Facebook also began letting people reply comments made during live broadcasts or weigh in with reactions such as sad, angry, love, or ‘wow,’ that were launched recently in News Feed. “Live Reactions appear in real time and disappear quickly so broadcasters and other viewers can get a sense of how people are feeling at different points during the live video – it’s like hearing the crowd applaud and cheer,” Simo said.

The social network also added filters that let people personalize the look of broadcasts, and planned to add the ability to draw or doodle on videos while they are being streamed live, according to Simo. Facebook unveiled a section dedicated to live broadcasts and made it simpler to search for video.

People accessing the social network from desktop computers will be able to use a Facebook Live Map providing “a window into what’s happening” in the world of broadcasts.

Facebook Live launched in the middle of last year and was initially limited to celebrities but recently opened to a wider audience of broadcasters.

The service allows members of the social network in 60 countries to use smartphones to live stream video. The new features were being rolled out to Facebook applications tailored for mobile devices powered by Apple of Android software.

Facebook has been working to tune into the growing trend of online video, an area where Alphabet-owned YouTube has dominated.

“We’ve been humbled by all the amazing and creative ways that people have used Facebook Live so far,” Simo said.

Simo saw immersive, 360-degree video as being part of a “natural evolution” at Facebook.