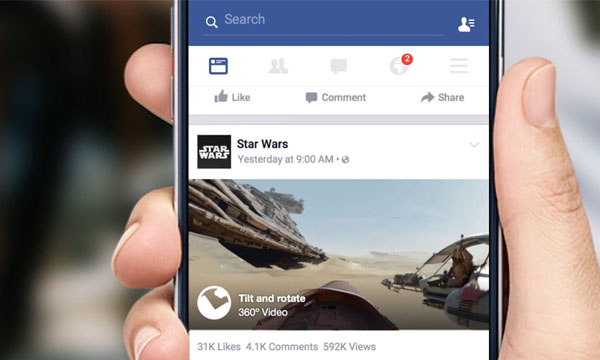 Mark Zuckerberg posted Facebook’s first 360-degree video Wednesday, filmed by the social network’s teams, in a bid to inspire the platform’s 1.5 billion users. Facebook is now hoping to welcome user-created videos and photos of this kind.

The video posted by the Facebook CEO was filmed in New York’s Grand Central Terminal. The social network’s first 360 video plunged viewers straight into the heart of the action. This spectacular movie was filmed with Facebook’s Surround 360 camera, unveiled in April at the F8 conference in San Francisco. This large, 17-camera device can film high-resolution 360-degree footage resulting in high-quality 360 videos.

The video can be viewed on a computer, although users have to use the mouse to see all of the scene. With a smartphone, viewers can simply move the device to explore the surrounding environment. It’s obviously with the Oculus Rift headset (owned by Facebook) that the experience is the most immersive, as the wearer can look around Grand Central Terminal by moving their head, as if they’re really there.

All 360 videos can be experienced in this way, although they’re still relatively few and far between. Facebook has supported 360-video since September 2015, and the social network is actively encouraging users to get to work creating their own 360 movies. Facebook has also announced upcoming support for 360-degree photos.

In the long term, Facebook aims to bring 360-degree video technology to its Facebook Live tool, which lets users broadcast live video on the platform.

At the 2016 Mobile World Congress, back in February, Mark Zuckerberg was keen to vaunt the merits of virtual reality. In fact, the Facebook CEO believes that the technology is set to shake up the nature of social networks as we know them. For Zuckerberg, these videos allow users to share feelings and experiences in real time with friends and relatives, no matter where in the world they may be. The challenge now is to find a way of broadcasting high-quality video while using the least bandwidth possible.