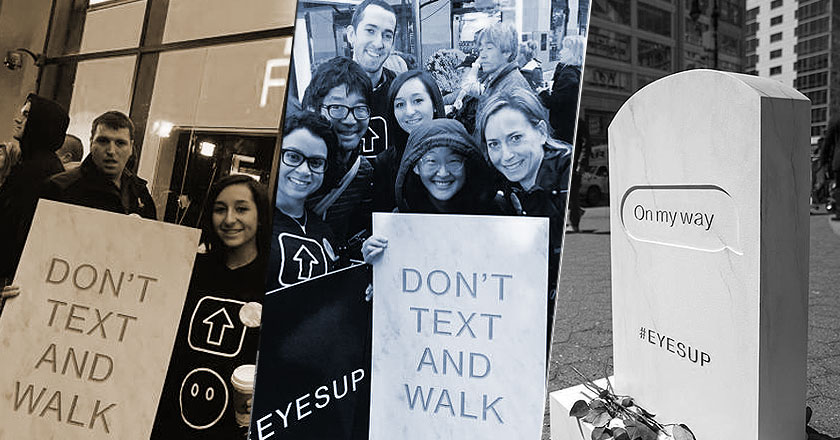 Marble tombstones and gravesites have popped up everywhere in the jam-packed, busy streets of NewYork City, puzzling the walking pedestrians, busy texting on their phones while crossing the road.

Apparently, this is a public service attempt by Interbrand to wake up the preoccupied walkers from their “texting reverie” and bring them back to life to remind them of the hazards of “distracted walking”.

Propped up with flowers, the gravesite has text messages inscribed like “Where r u”, “Cya later”, and “On my way”, with “#EyesUp” hashtag mention underneath to highlight the campaign.

Check out the FB page of the Eyes Up campaign here.

Seemingly, the death toll resulting from the accidents of people who are busy with their phones while walking, is on the rise in U.S.A.

A research by Ohio State University revealed that more than 1500 Americans were rushed into emergency rooms who became victims of being digitally occupied on the roads. The previous year, around 144 New Yorkers lost their lives in traffic accidents and most of them were caused due to distracted walking.

Authorities in U.S.A have now imposed a heavy fine on the pedestrians who keep their eyes on the phone rather than on the streets.

Interbrand’s “EyesUp” gravestones are dedicated to all those tech-occupied, multi-tasking walkers that they can be the next to join the ranks of the “Walking Dead” if they don’t pay attention to the road.