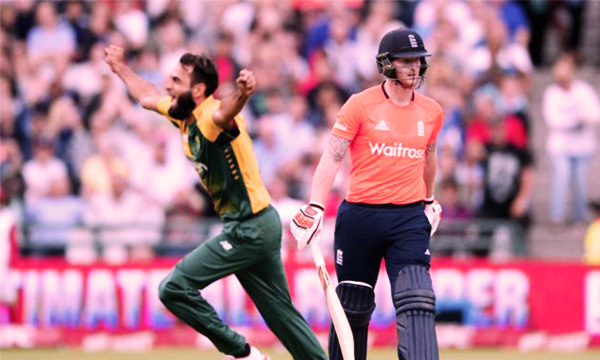 England need a win against South Africa Friday after defeat in their opening World Twenty20 match while the Proteas want to get their bid for a first international trophy off to a strong start.

Captain Eoin Morgan’s England side were blown away by a Chris Gayle century at the Wankhede Stadium in Mumbai on Wednesday night as the West Indies won by six wickets.

Morgan will be looking for more from his batsmen after they fell short of his target of 200, finishing on 182 for six, and from his bowling attack who he said performed at around 80-90 percent.

The English skipper rued losing the toss to West Indies captain Darren Sammy, who opted to field, and Morgan feels the game of chance will again play a big part on Friday in Mumbai’s humid conditions.

“It was a lot more dewy tonight and the ball got a lot more wet. But certainly we’re better for playing in it,” he said following the opening Super 10 Group 1 defeat.

“Even at the toss I said I was going to chase so it could be a big part for me in the South Africa game,” Morgan added.

The captain said before the tournament that he would use all 15 squad members at his disposal, and replacing David Willey with powerful fast bowler Liam Plunkett is a likely switch for Friday’s do-or-die contest.

Morgan said he treated every match as “a must-win game” and the next encounter is no different as a second defeat would all but end England’s chances of progressing to the semi-finals.

For South Africa the night match marks the start of their quest to once and for all remove the chokers tag that skipper Faf du Plessis admits has become “a monkey on the back” of their team.

Since their readmission in 1991 after the apartheid era ban, the Proteas have been the nearly men of world cups in both T20 and 50 over cricket, falling agonizingly short of the final on several occasions.

Despite their failure to win a major trophy, South Africa are one of the tournament favourites and are currently in third place in the T20 world rankings.

“The only way you can get rid of that (the chokers’ tag) is to perform under pressure,” du Plessis said last week.

“I think it’s fair but the only way you will ever get that monkey off your back is if you do win a trophy,” added the 31-year-old batsman.