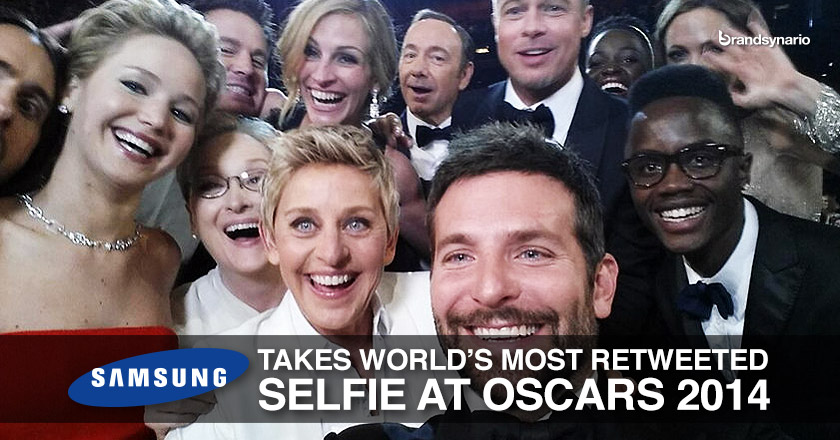 LOS ANGELES: Ellen Degeneres, once more hosted the Oscars at the 86th Academy Awards. After 7 years, Ellen has once again proved that she is every bit of worth to lead the Academy Awards with her grace and good sense of humor.

Howsoever, there were a few things to notice along with Ellen’s hosting, the fact that she kept flashing her Oscar sponsored Samsung Galaxy Note 3 at many different moments during the Oscars.

Not to forget the selfie, to take which she paused her hosting for quite a few moments. The selfie initially included Ellen and some of her favorite stars including Jennifer Lawrence, Bradley Cooper and Meryl Streep but just before Ellen could click the selfie, many other eager stars also joined in voluntarily, making the selfie to finally feature Jared Leto, Jennifer Lawrence, Meryl Streep, Brad Pitt, Angelina Jolie, Ellen Degeneres herself and Bradley Cooper who actually took the snap.

Ellen being a multi-tasker, tweeted the snap within moments on her twitter account, after which the selfie was recorded to have broken all the previous records, with 1.7 million retweets and 700,000 favorites in less than an hour.

If only Bradley’s arm was longer. Best photo ever. #oscarspic.twitter.com/C9U5NOtGap

The selfie also broke the record of the previously most retweeted selfie of Barack Obama, which held a record of 778,000 retweets.  The selfie was later found to be a marketing tactic by one of the biggest sponsors of the evening, i.e. Samsung for their Galaxy Note 3 promotion.

After posting the selfie online, Ellen Degenneres continued hosting the show after an hour of which she realized the enormous response that her selfie has receive, to which she announced on stage that the picture “Broke Twitter” meaning that the response caused Twitter to crash.

The selfie with the most number of Oscar nominees taken by Samsung Galaxy Note 3 has made it to the top and is now the most acclaimed selfie of all time.

Although, it came as a surprise to us that just after the promotion of Samsung at Oscars, Ellen returned back to her Iphone from which she tweeted:

Minutes after promoting Samsung on the #Oscars stage, Ellen returns to her iPhone. Incredible. pic.twitter.com/LVsD2YIoXj