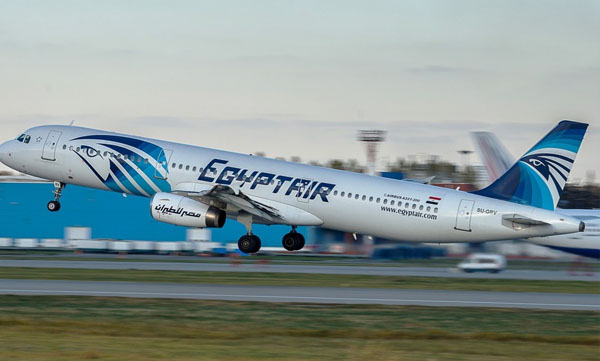 Update: Egypt‘s military said its search teams found wreckage on Friday from the EgyptAir plane that crashed in the Mediterranean with 66 people on board.

“Egyptian aircraft and navy vessels have found personal belongings of passengers and parts of the wreckage 290 kilometres (180 miles) north of Alexandria,” its spokesman said on his Facebook page.

An EgyptAir flight that vanished over the Mediterranean on Thursday was carrying 30 Egyptian and 15 French passengers, as well as a Briton and a Canadian, the airline said.

An Algerian, a Belgian, a Chadian, two Iraqis, a Kuwaiti, a Portuguese, a Saudi and a Sudanese were also on board the flight, EgyptAir said in a statement.

The Egyptian military deployed search aircraft and naval vessels to locate an EgyptAir flight with 66 people on board that vanished over the Mediterranean on Thursday, the army said.

Greece was also participating in the search for the Airbus A320 that lost radar contact after entering Egyptian airspace en route from Paris, it added.

A search and rescue operation was under way Thursday after an EgyptAir flight with 69 people on board vanished from radar en route from Paris to Cairo, the airline said

A tweet on the airline’s official account said flight MS804 left Paris at 11:09 pm local time (2109 GMT), “heading to Cairo (and) has disappeared from radar”.

There were 59 passengers and 10 crew aboard, according to the airline.

“EGYPTAIR has contacted the concerned authorities and bodies and inspection is underway through the rescue teams,” another tweet in English said.

The flight from Paris Charles de Gaulle to Cairo normally takes just over four hours and the plane was due to arrive at 3:05 am local time.

EgyptAir hit the headlines in March when a flight from Alexandria to Cairo was hijacked and forced to divert to Cyprus, where the “unstable” hijacker demanded to see his ex-wife.

In October, the Islamic State group claimed responsibility for bombing a Russian airliner carrying holidaymakers from the Egyptian resort of Sharm El-Sheikh, killing all 224 people on board.

The disappearance of the jet on Thursday comes more than two years after the start of one of the most enduring mysteries in aviation history. Malaysia Airlines Flight MH370 vanished on March 8, 2014 en route from Kuala Lumpur to Beijing with 239 passengers and crew onboard, mostly Chinese and Malaysians.

Authorities believe the Boeing 777 detoured to the remote southern Indian Ocean and then plunged into the water.

The costly, painstaking search for a crash site has yet to yield results, but five pieces of debris have been identified as either definitely or probably from the jet, all found thousands of kilometres (miles) from the search zone, likely swept there by ocean currents.

Theories to explain the disappearance include a possible mechanical or structural failure, a hijacking or terror plot, or rogue pilot action.