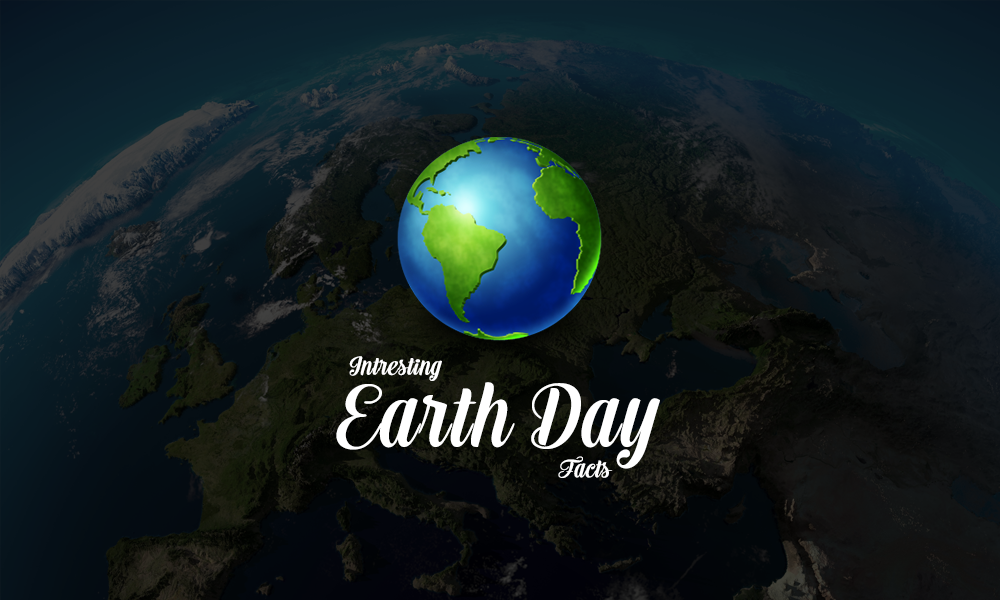 We have been mystified about aliens and the presence of life on other planets for as long as one can remember. But, in actuality, our Earth has all the components to make a jaw-droppingly successful blockbuster of all times: from the volcanoes, meteor showers to collisions between rocky plates, from the ocean’s deep abysses swirling with odd life to the hottest, highest and all-out extreme spots.

Did you know Earth is not actually a sphere? That we are rocketing around the sun at 67,000 mph? That the majority of Earth’s fresh water is locked up in Antarctica?

We dug a little deeper and found 25 interesting facts about the orb that we call home, in order to boggle your mind and make you respect this planet a little more this Earth Day; which is today.

19. 95% of the Earth’s Oceans still undiscovered

Do you think we know everything about the earth? Not at all. Up to 95% of the Earth’s oceans have still not been explored by man. We don’t know what’s under there. In fact, we have better knowledge of the outer space than of our own waters. Have you ever felt like there aren’t enough hours in the day to get your work done? That’s because there aren’t. There are exactly 23 hours 56 minutes and 4 seconds in a day which is the actual time it takes the planet to rotate on its axis. This is called a Sidereal Day. 17. The Earth’s rotation is gradually slowing

Now I know why do I feel like the days are gradually increasing. It is because the earth’s rotation is gradually slowing. This deceleration is happening at approximately 17 milliseconds per hundred years. This has the effect of lengthening our days, but it happens so slowly that it could be as much as 140 million years before the length of a day will have increased to 25 hours but I can feel it already! 16. The Earth was once believed to be the centre of Universe 15. The Earth is the densest planet in the solar system

This varies according to the part of the planet; for example, the metallic core is denser than the crust. The average density of the Earth is approximately 5.52 grams per cubic centimetre. The coldest spot was Antarctica’s Vostok station that recorded the lowest temperature of -128.6 F (-89.2 C) Moving on, the hottest temperature ever recorded was 57.8 C in El Azizia, Libya in 1922. 12. Mount Everest is NOT the highest point on Earth

Your whole life is a lie. The said to be the highest peak of the world, Mount Everest, standing tall at 29035 ft above the sea level is even though pretty darn tall but stands 1.5 miles lower than Mount Chimborazo in Ecuador which, even though, is 20564 ft tall but because of the fact that Earth is not a perfect sphere and Mount Chimborazo is located on a bump, it got lucky. 11. Antarctica has it all

Antartica is also known to contain about 70% of Earth’s fresh water and 90% of its ice. How is that fair? Also, gravity is not fair even. Yep, it is not equally distributed. Places like Hudson Bay in Canada have less gravity than the less of the world. At one point, the Earth was believed to have two moons. The moving rocks in the Death Valley that weigh hundreds of pounds are known to slide across the valley, leaving a trail behind them. Scientists believe that this is due to the wind and ice. Coral Reefs, constructed from millions of tiny polyps, are the largest living structures on Earth. Some of them are even visible from space. And these vast seas are rich, holding more than 20 million tons of gold. But don’t grab your mining hat just yet, the metal is so dilute that each liter of seawater contains, on average, about 13 billionths of a gram of gold. Undissolved gold is also tucked away in rocks on the seafloor, and though there’s not an efficient way of getting at that precious metal, according to NOAA, if we could extract all of it, each person on Earth could have 9 pounds of the shiny stuff. *Woah, I want my share* The driest spot on Earth is the Atacama Desert of Chile and Peru. In the center of this desert, there are places where rain has never been recorded. When we think about big life, whales and elephants come to mind. But try on this tree for size: The General Sherman giant sequoia is the largest known stem tree by volume on the planet. The trunk of the tree contains slightly more than 52,500 cubic feet (1,486.6 cubic meters) of material. 3. The Name “Earth” Comes From Anglo-Saxons

Earth is special. While every other planet in our solar system is named after a Greek or Roman God, the word Earth comes from the Anglo-Saxon word Erda, which means “ground” or “soil” and is thought to be 1,000 years old. Some large object once crashed into Earth a long time ago, according to a lot of researchers, and the resulting debris blends to form our moon. It is unclear though if that colliding object was a planet, asteroid or comet, with some scientists thinking a Mars-size hypothetical world named Theia was the instigator. Scientists believe that Earth once had a “twin” planet we call Theia, which was the size of Mars. Theia supposedly crashed into the Earth; most of the planet was absorbed, but a large chunk blew off and combined with materials from our planet to create the Moon.