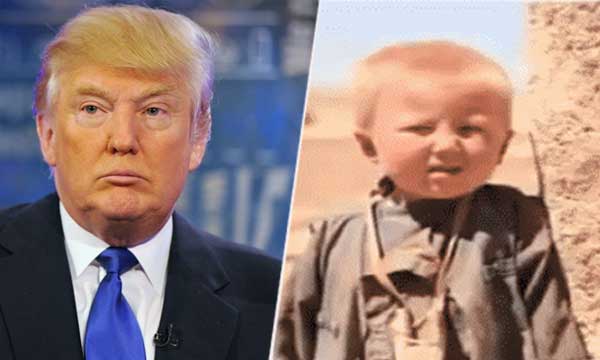 Donald Trump has become President of the United States of America and the whole world lost its chill. There was an uproar on social media regarding Trump’s victory and amidst all the frenzy, a local news channel broadcasted a prime-time report that the newly elected American president was born in Pakistan.

Neo News took the social media sarcasm a bit too seriously and reported the news in a sensational way that Trump was a Pakistani child named, Dawood Ibrahim Khan.

According to Neo TV, Donald Trump was born in Shawal North Wazirstan Pakistan. His real name is Dawood Ibrahim.

According to Neo News, this was Trump’s childhood picture in Pakistan! Sporting an enthusiastic tone, the media anchor revealed Trump’s parents died in 1954 road accident and  his early education was from a Madrasa in Waziristan.

What is more, the report added that  British Indian Army captain then took Dawood to London and transformed him to Donald Tump.

See the shocking news report by NEO News for yourself here!

For those who don’t know, Donald Trump was born New York on June 14, 1946. He then began a real estate business with his dad after he graduated from college.

Seems like the news channel did not care what they are reporting to reap the ratings and eventually, misled the viewers.

Read how social media reacted to the news!

you are mistaken. His real name is Dawood Ibrahim Khan according to this Pakistani news report https://t.co/XVTGLnPb5V pic.twitter.com/Nsvb7WamI9

Ajeeb qom hai… Dawood Ibrahim Khan is the real name of @realDonaldTrump & was born in Shawal, Waziristan haha this is extreme

Woke up to the most funniest thing this morning… 45th @POTUS is not an American but actually a Pakistani, says NEO TV. I'm dead hahaha pic.twitter.com/ARKt8dXdpM

What do you think about Neo New’s sensational reporting of Donald Trump? Share with us in the comments below.