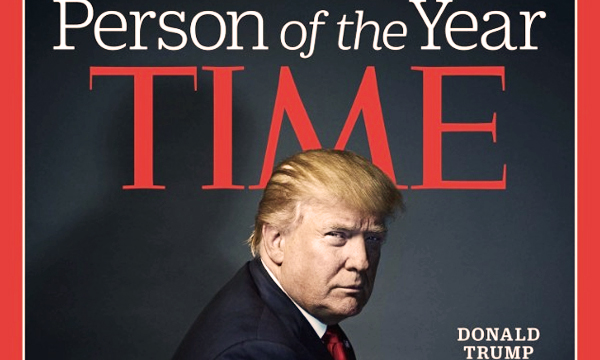 .The infamous Time magazine has been known to awarding the ‘Person of the Year’ title to many notable personalities who have negatively or positively impacted the society. This year, President-elect of the United States of America, Donald Trump was given this honorable title and nobody is surprised!

Although the announcement of this cover had been made public prior to its release as Time always does, many immediately began to question it.

The Twitter-verse has especially been sharing the image of the cover, but it may not be for the reason you are thinking of. Many people are beginning to think that the position of the letter ‘M’ in Time, which is sprawled behind Trump’s head, seems to be representing horns, in turn making him “the devil.”

Horns. They gave him horns. pic.twitter.com/f7lnL0qOkA

Give that art director a raise pic.twitter.com/5Xe1RrOGbj

Kudos to the designer who made the "M" look like devil horns. We will send you care packages after Trump throws you in prison. pic.twitter.com/jsqKxC8IOq

“The person or persons who most affected the news and our lives, for good or ill, and embodied what was important about the year, for better or for worse,” as stated by the former Managing Editor of Time, Walter Isaacson in the 1998 issue of the magazine.

It is important to note that this title can be presented to anyone who has generated a significant amount of media coverage. It is also to be considered that Hitler and Stalin are one of the many questionable candidates that have made the front cover.

Not to mention, Hitler’s cover is also being heavily compared to Trump’s.

Similarities between the Hitler and Trump @TIME covers and the devil horns created by the "M"… intentional? pic.twitter.com/N8lhTGyl2K

Dark, icy-cold shadows on his hands w spotlight vignetting on his face, the over-the-shoulder physicality—all straight from the early 40s

However, Time clapped back on Twitter shutting down all rumors in one easy sweep, showing that the so-called horns have been done before- 35 times to be exact.

35 TIME covers that appear to give people horns https://t.co/iYcmVVsZPe

It is interesting to note that just last year Trump publicly threw a tantrum on Twitter when Time chose Angela Merkel, the German chancellor, as their person of the year over him.

This wasn’t the first time he bashed Time magazine. In fact, in 2013 he claimed that the magazine is likely to go under and will “soon be dead.”

We are quite positive that Trump will not be holding the same views anymore. However, knowing Trump, anything is possible.

What do you think of Time’s latest cover? Let us know in the comments below and stay tuned to Brandsynario for more.