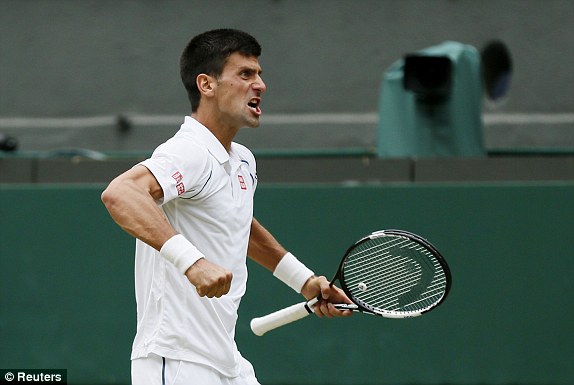 Novak Djokovic of Serbia and Swiss legend Roger Federer battled it out on Center Court in the final of the 2015 Wimbledon tennis tournament, the most prestigious tennis tournament in the world. In a topsy-turvy, hard fought game, which swung one way and then the other, arguably one of the greatest finals of recent seasons was taking place in front of our very eyes, which the Serbian magician eventually won in four sets.

In a repeat of the 2014 Wimbledon final, in which the eventual champion Novak Djokovic beat Roger Federer in five sets, the Swiss maestro chased a record eighth Wimbledon crown, while the defending champion looked to win his third.

The Serbian tennis ace won the first set, courtesy of some brilliant, high octane tennis, that forced Federer to commit an unusually high number of unforced errors. Despite breaking Djokovic’s serve in the seventh game of the first set, the Swiss legend was unable to make his advantage count, with Djokovic breaking serve in the very next game. The set eventually went to a tie break, which Djokovic won 7-1, courtesy of some fine hitting and amazing footwork.

Federer regained his composure in the second set, and showed his true class with some brilliant backhands and majestic forehand winners, keeping Djokovic at bay and taking the set to a tie break. Courtesy some nerves of steel, Federer saved seven set points to win second tie-break 12-10. The third set’s play was delayed due to rain, before Djokovic put the third set to bed with some ruthless serving, taking the set 6-4.

The fourth set started with Federer appearing to be a little fatigued, and it was noticeable how Djokovic was more aggressive and on the front foot, stepping inside the baseline, and also very successful at the net in the third set with 9/10 for net approaches. It must be noted that Djokovic has won 29 matches in a row from two sets to one up. The Serb eventually broke Federer’s serve twice, winning with a magnificent cross-court forehand to wrap up the final 6-4.