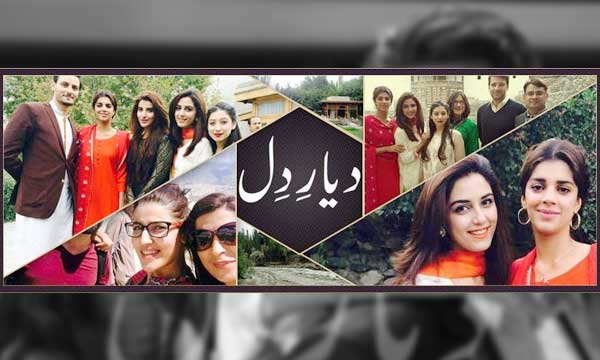 What’s more, the heart-touching blockbuster has lucratively filled the void created by the forever phenomenal Humsafar and joined the ranks of Pakistan’s most darling drama serials.

While we thought that the nation’s drama devotees will never be over Fawad-Mahira’s popular pair, they have gone absolutely crazy after Osman Khalid Butt’s and Maya Ali’s romantic equation.

With its last episode, it has left us all overjoyed with a stream of happy tears with its high- on- emotions finale.  Let’s take you to an accurate and honest summary of the drama’s closing moments, that made us fall in love with the Hum TV’s roller-coaster ride of entertainment all over again.

The finale kick starts with Farah, sobbing her heart out with her dearest Agha Jaan. She is dejected that Wali did not eat the “Gajar Ka Halwa” she made out of pure love to flatter him!

Her annoying wails and horrible crying skills will surely be missed by all Diyar-e-Dil fans. NOT!

However, Wali is being the silent killer, enjoying her attention and playing all hard to get! He totally won us with his pun “5 saal khuwar kiya hai mujhey, mein 5 din bhi nai kerskata!” Our heroine is all jittery, practically torn apart from the idea of being separated from her hero. She gets her stalker mood on, keeping an eye on his every move. Little does she know that Wali is playing with her so that she confesses her love for him.

Osman Khalid Butt did a splendid job, playing the calm and cool Wali. His wolfish grin here while teasing Farha will totally slay you!

Meanwhile, we all breathe a sigh of relief seeing Roohi and Arjumund finally at peace with each other.

Poor Farah, just could not take it anymore. While they are all bonding together and waiting for Wali’s surprise announcement at midnight, she runs away and finds her solace in a room. Turned out, it was Wali’s space she founded so comfy the whole time.

And then Wali walks in next morning while she is sleeping and gazes so loving at his wife, safe in a deep slumber.  With his sniper smirk doing its game, he wakes her up.

And we all died laughing with Farah’s dumbfounded expression. Their chemistry was so sharp and crackling that it could have cut the air with a knife!

Wali begins toying with her, pushing the damsel in distress right to the edge.

He continues with his silly shenanigans till the last moment. Eventually, she breaks and confesses her love for Wali. FINALLY!

Then she realizes how Wali was trolling her the whole time and pulled off an April Fool. LOL. And our love-worn haseena breaks into a mushy smile for the first time in the whole of the last episode. The ending moments  were nothing but a weighty dose of WaFa’s romantic scenes, something we all had been waiting for 8 whole weeks.

But guess who bombed on their epic intense scenes we are so eagerly watching?

The immortal Bhutto of Diyar-e-Dil family Agha Jaan! We have to admit Abid Ali played his best as in the inspirational avatar of the tyrannical turned soft landlord. The show ended on the chants of Yaar-e-Man, leaving us a bit disappointed for not showing Wali-Farah’s wedding we all so wanted to see. Undoubtedly, we all have been  so obsessed and gripped with the drama that it will take ages to get over the romantic tale of “Wali” and“Farah”.

Set in the breathtaking valleys of Gilgit-Baltistan, the directorial project of Haseeb Hassan has left the viewers spellbound with its magnificent set locations and outstanding cinematography.

The drama’s crisp editing and exceptional direction will make you head over heels in love with the natural scenic beauty of Baltistan. Worthy of mention is the soothing, soul-stirring OST of the drama sung by Zeb Bangash and Momin Durrani.

Full of visual creativity, fueled with intense passion and topped with stellar performances,  Diyar-e-Dil recorded an outstanding entry in the season and its exit is even more exceptional.

What do you think of Diyar-e-Dil’s ending? Share with us in the comments below.