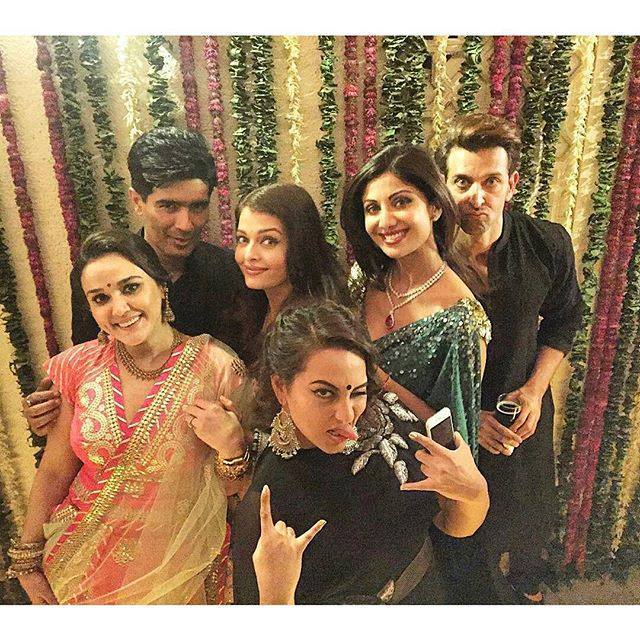 Diwali, the festival of lights, is just around the corner, and everyone’s favourite Bollywood celebrities have already kick-started the festivities. The party plans are in full swing, with invitations awaiting the R.S.V.P.s.

Sushil Gupta’s Diwali party drew in a number of notable guests, among them actresses Dia Mirza and Esha Deol, and director and producer Ekta Kapoor.

Watch Deepika and Ranbir perform at a Diwali event:

The actresses were in attendance with their husbands. A number of Indian television stars were also present, such as the likes of Vivian D-Sena and Shabbir Ahluwalia. Govinda chose to spend Diwali with his daughter Tina Ahuja, enjoying the festival of lights at home. Sachiin Joshi’s party was attended by Bollywood celebrities like Randeep Hooda, Esha Gupta, and Sanjay Dutt along with his wife Manyata Dutt.
Check out pictures of your Bollywood celebrities from various Diwali bashes!

Akshay Kumar also held a Diwali bash for their Bollywood buddies on November 9, hosted alongside with his wife Twinkle Khanna at his residence. “We have been hosting a Diwali party at home ever since we got married fourteen years ago. It is an annual tradition now,” Khanna says. Kumar reportedly flew back home from his filming for his 2016 movie Airlift, in order to join the celebrations at home.

The Bachchans will also be holding their regular Diwali party on Diwali day, where their regular invitees will include the likes of Shahrukh Khan, Hrithik Roshan, Farhan Akhtar, Sonakshi Sinha, and many more.

The party will take place at the Bachchan home in Juhu, with Aishwarya Rai-Bachchan flying home to Mumbai from London.

It seems Salman Khan has some simpler plans for Diwali for the time being. With his movie ‘Prem Ratan Dhan Payo’ due for a Diwali release on 12th November, Salman’s and his family are planning for an afternoon viewing of the movie as part of their Diwali day celebrations.

Diwali is an opportunity for celebrities to show off their ethnic fashion sense and love for the festival and is a bright and joyful affair. As Diwali arrives, so do the festivities, and the coming days are sure to bring some more glimpses into the Diwali plans of a lot of our favourite Bollywood stars.