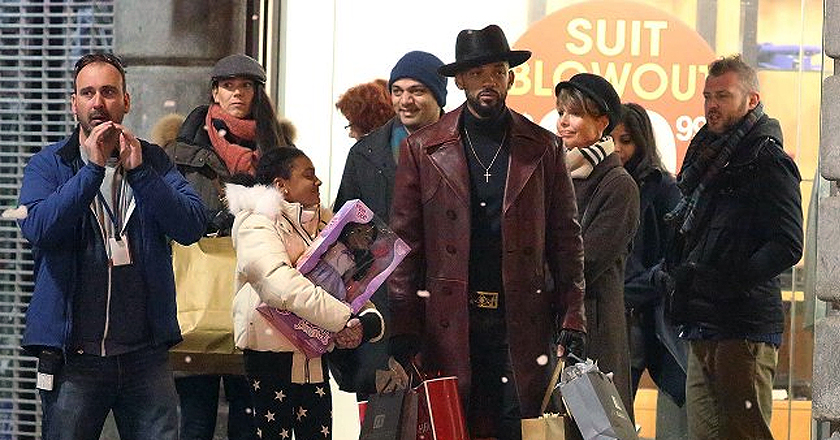 We already knew what Jared Leto’s Joker looked like, but now Margot Robbie,Cara Delevingne, Will Smith and everyone else’s characters have been revealed.

Ayer followed that up with a reveal of a close-up image of Smith’s Deadshot wearing his mask.

Have something to add to this story? Share it in the comments.

With its revamp in full swing, DC Comics is bringing in its latest supervillains’ movie, Suicide Squad, in collaboration with Warner Bros.

The movie has just begun shooting this month in Toronto, under the direction of David Ayer, previously having shot to fame with his writing in Fury.

David Ayer’s latest DC flick, an out and out villain fest, Suicide Squad, revolves around a group of supervillains offered redemption by Government; on the condition they fulfill a mission successfully. The only catch in the entire plan is that everyone might just end up dead during the mission.

In the movie Suicide Squad, Will Smith will play the part of the ultimate assassin, Deadshot, Jared Leto will be the ever popular villain Joker, Margot Robbie as Joker’s girlfriend the sexy Harley Quinn, Viola Davis as the lawful antihero Amanda Waller, Cara Delevingne as the magical Enchantress and Joel Kinnaman as the vicious Boomerang.

While the strong cast team makes the movie, under the production of Charles Roven and Richard Suckle, makes it highly anticipated, what would make the movie stand out will be the portrayal of the Joker.

Previously, played by the late Heath Ledger, the character of Joker was one of the most appreciated by the DC Comics fans. With standards set so high, it is yet to be seen if Jared Leto will be able to do justice to the role. Here is the frist look of Jared Leto as the Joker in Suicide Squad.

In addition to all these exciting updates, is the rumor of the appearance of Ben Affleck as the Batman in the movie. While the news is still unconfirmed, the actor is seen making appearances at the sets in the Bruce Wayne attire.

The movie will hit theaters on 5th August 2016.