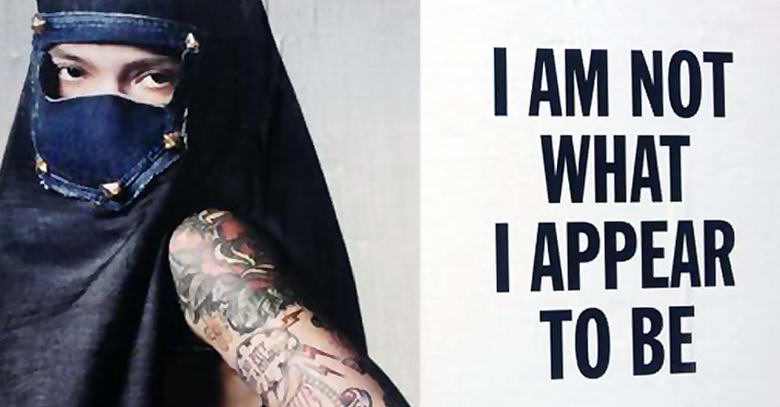 They say there is a fine line between genius and Insanity. Medical science has also proved the genes for both traits to actually be a result of the presence of the same set of genes.

The visual you see above, is a part of Diesel’s upcoming campaign which seeks to show the misconception attached to wearing burqa.

The question is – would you classify it as genius or insane?

This ad campaign showing a pale white topless woman wearing a redesigned BURQA gave birth to a colossal wave of Muslim emotions worldwide that has drowned Diesel’s campaign to its agonizing death. As some called the ad Islamophobic others just named it hypocritical and condescending.

The creative team behind the campaign, also includes a female Muslim marketing consultant named Amena Meer, who replied to all the criticism by saying, “This was to challenge that idea that when you see a woman in a burqa, or niqab or even hijab, that you assume certain things about her”.

The International community seems to have something to say about the ad, the stand points may be different but one thing stands out as the same, everyone wishes Diesel had rather not done it.

Shruti Parekh a famous New York videographer and member of South Asian women creative collection, assesses the creativity, imagination, execution and eventual feel of the campaign by saying, “On the most basic level, the ad appropriates the burqa and puts it on a white woman in a socio-political context rife with Islamophobia and attacks on the Muslim world… And Muslim women who wear the burqa in the West have had to deal with everything from discriminatory banning laws in Europe to racist slurs and hate crimes. Meanwhile, this white woman who wears her Diesel burqa bears none of the hate or loaded connotations that Muslim women bear on the regular… This level of cultural appropriation is more than a disrespectful “borrowing of culture,” it is a nasty flaunting of privilege.”

Angel Millar, a writer specializing in religion and symbolism, said Western fashion has long been influenced by Islamic culture, and the Diesel ad is just the latest example.

While the controversy generated by the Diesel ad surprised her, ad consultant Meer said “As a Muslim, I felt like it was really important we’re having these questions,” she said. “We’re talking about what it means.”

Parekh thinks the ad could have been significantly constructive for both the company and Muslim women’s sake had the intention in the creativity been a little different, as she further remarks, “This image would mean something drastically different if it was created by Muslim women, and if the woman was actually a Muslim model in the context of a fundamentalist Islamic regime. It might be radical, bold, and subversive. It might actually be an empowered assertion of women’s sexuality.”

But context is everything, and in the context of a white woman in a Diesel ad created by Americans, the meaning and symbolism twists inside out and is deeply disrespectful.”

Whatever the viewpoints maybe the fact of the matter remains that in order to breakthrough a stigma, Diesel has created another controversy that only promotes it.

The artists believe the ‘art’ to be globally inoffensive, that is why it is believed to be the silent language of the human race. Thus the creativity behind the Diesel campaign can be deemed not so creative after all.

Also, the kind of cultural appropriation is revolting to many. it seems that some people do not understand that certain sentiments are not meant to be hurt, it was not acceptable when ‘Sex and the City’ used Naqab as a cheap form of humor, it was not okay when Lady Gaga sang the worthless song named “Burqa” which in turn gave the world, the “Burqa Swag” – another insult and its certainly not okay for Nicola Formichetti to use it in such a sexualized manner to further his own design career.

Hence, these facts factual proclamations mentioned above give out a better idea that on which side exactly does this ‘imaginative’ ad fall on the earlier mentioned line between ‘Genius – Insanity’.