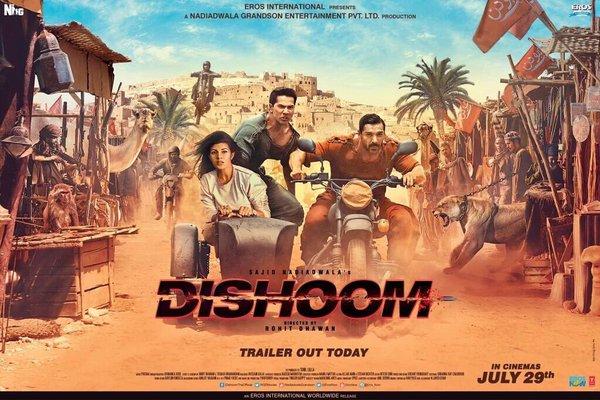 John Abraham and Varun Dhawan will surely make the girls go weak in the knees with their hot bodies and super killer looks in the poster of the upcoming movie ‘Dishoom’.

The much awaited trailer of Dishoom movie is finally out and it is more than what we expected!

Did you like the power packed trailer of Dishoom?

Prior to the first trailer launch of Dishoom, the action film makers have unveiled the second poster, featuring Varun Dhawan, John Abraham and Jacqueline Fernandez. Dishoom is all set to release in July and while the female lead actor is Jacqueline Fernandez. The film is an action packed flick. The first poster revealed features John and Varun as cops walking the streets with a bull dog. According to the Indian media, Sajid Nadiadwala and Rohit Dhawan have based Saqib Saleem’s character in the film on the Indian player Virat Kohli and at one point of the film, he gets kidnapped. Saqib Saleem who plays Virat Kohli in the movie is shown at the top of his game making his team win. A picture of Saleem with Kohli has also emerged on social media creating much hype to the adventure film. Rohit Dhawan has directed the movie while Sajid Nadiadwala is the producer- Dishoom is all set to release on July 29th, 2016. The trailer of the film is to release on June 1st, 2016.