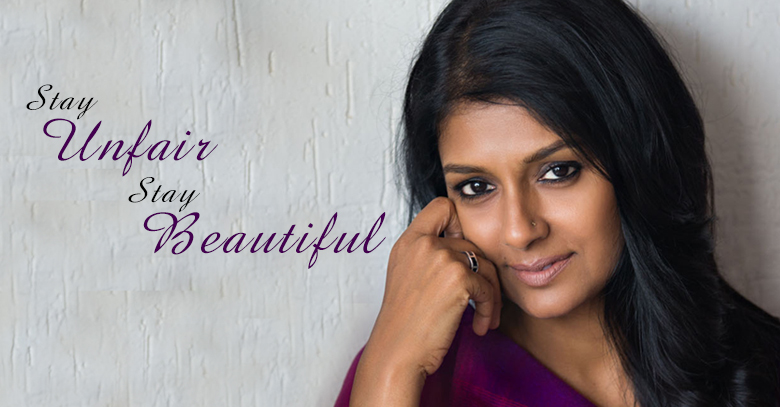 “Mirror, Mirror on the wall who’s the fairest of them all?” pronounced Snow White’s step mother in the fairy tale, Snow White and the seven Dwarfs.

It was instilled in our minds that being fair was all one needed to be successful in every field of life. Can you recall any fairy tale princess who was not ‘white as snow’ and ‘pink as roses’?

The word ‘fair’ was often used as a synonym for ‘beautiful’ and hence, the phrase, “I welcome you my fair lady?” Wouldn’t the lady be warmly welcomed if she wasn’t fair?

These are the questions which forced the Indian beauty Nandita Das to come forth in the ‘Dark is Beautiful’movement against fairness products.

Launched in 2009 by Women of Worth, the campaign challenges the belief that the value and beauty of people (in India and worldwide), is determined by the fairness of their skin.

“From the time I came into the public domain and have been written about, 9 out of 10 articles start by describing me as being dusky or earthy. A reference to the color of my skin does not escape the best of journalists,” Das said in one of her interviews regarding the campaign.

The underlying objective, of the campaign, is to give confidence to the dark and dusky women and help people understand the pain of a mother who sees people discriminating between her two daughters on the basis of skin tone.

In the Indian society, fair colored women are a preferred over the dusky ones in matrimony, social events and even in the corporate world.

In her blog Nandita writes, “Whenever I interact with college students, especially young girls, I invariably get a question to the effect, “How come you are so confident despite being dark?”

Das’s point of view stands firm, promoting the fact that all women are equal and deserve all prerogatives to look their best, no matter what color they are or how ‘dark’ they may appear. Each woman, according to Das, has a unique identity and how differences in areas of education and learning make them stand apart from one another and not their skin color.

Her campaign has been a huge hit, bringing some of the most basic issues to books suggesting that success of a woman has nothing to do with the color of her skin.

Quite a number of brands have joined the Fair-Skin-frenzy but then again advertising only ‘reflects’ the needs of society. ‘Dark is Beautiful’ movement is not against that one ‘fairness cream brand’ but against all those who stereotype dark woman as something to despise, be it brands, soaps or movies.

Every day, many women wage a war against their natural skin tone and features just to appease the ever-demanding society. Multiple surgeries, remedies, entire routines and diet plans are designed in order to compete in the ‘Fairathon’.

Women should learn to understand and respect themselves.  Today, some of the big names in the industries around the world are women especially in Bollywood.

Das herself gained popularity through this very industry where ‘Bengali Beauties’ such as Kajol, Rani and Bhipasha were welcomed with open arms and open minds.

At any cost, the self-esteem of a woman and her status should not be compromised, based on her looks, but with appreciation and acknowledgement of the work that she does is what should be highlighted and promoted in the society at large.