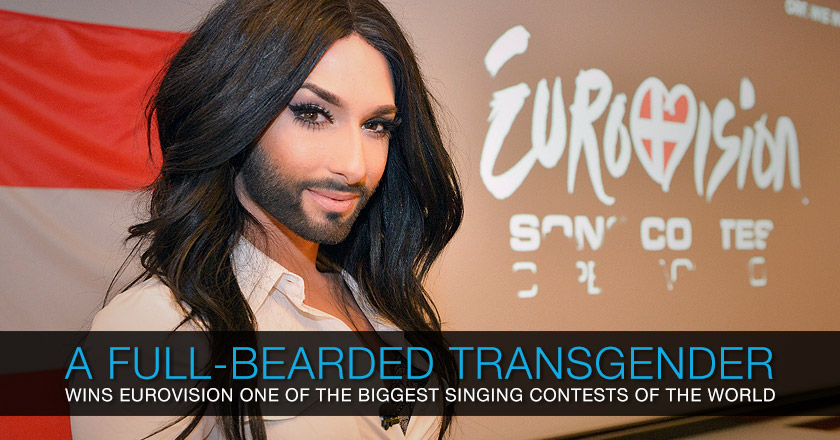 The famous bearded lady Conchita Wurst,, was destined to cause controversy, in turn she/he ended up winning the competition, Yes, it was one political gamble that paid off throughout Europe.

Her catlike grace, outrageous dresses all with the eyelashes of a fairytale princess and of course the full blue-black beard, Conchita Wurst was never ‘just another’ contestant.

It wasn’t long when she became an ambassador for the gender spectrum. Paris Lees, famous Trans-activist states: ‘They say trans-genders reinforce gender roles while simultaneously they try to push us back into neat little ‘boy’ or ‘girl’ boxes. Conchita knows no such box — and she won’t let radicals, Russians or right-wingers tell her who she is supposed to be.’

Eurovisionis is considered to be the biggest song contest in the world. The event has always been gay and obviously trans-friendly; point is that cross-dressers and transsexuals have participated in it before. However Conchita’s gender fluidity remains unmatched.

Eurovision is a rather unique singing competition – in which people and judges vote for ‘a country’, rather than a song, which results in elimination or escalation. Therefore, Conchita, representing Austria had to face criticism and protests even from her own mother country. Yes, even the Austrians did not approve of her representing their country.

The path to victory was not smooth for Conchita also. Russia along with its satellite Belarus filed petitions to stop Eurovisions’ broadcast because of her presence.

In the end, Conchita sang her heart out, and that is all that has ever counted. An Act of Heart.

Conchita’s victory was not only her own but it marked a victory of tolerance and broadmindedness.