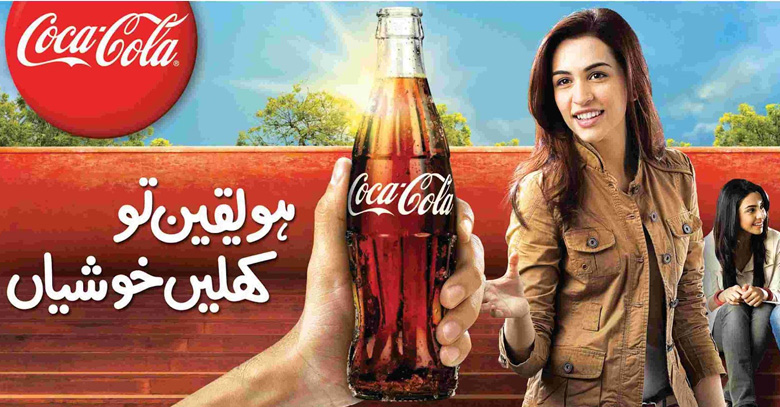 Coca-Cola launched the local adaptation of its global “open happiness” and “reasons to believe” campaign by amalgamating the two to give a patriotic appeal. The new campaign’s tagline was “Ho yaqeen tou khulein khushiyan”.

As a firm believer of positive change, I was pleasantly surprised to see the ad campaign on TV when it was launched at the start of this year.

According to Mr. Fahad Qadir – Director Public Affairs & Communications, The Coca-Cola Export Corporation, Pakistan & Afghanistan Region, “Coca-Cola realized there was a need to address the prevailing negativity and disappointment amongst masses, and the beginning of 2012 was chosen to unveil our campaign.”

A new year is associated with new beginnings, new goals and identifying areas of self-improvement. So the new year time complimented the overall message of the campaign which talks of taking ownership, believing in yourself, but most importantly believing in a better Pakistan.

”Charged with emotions and patriotism, the ad campaign has the ‘feel good’ factor and successfully breaks through the negativity that surrounds all of us every day and invites the audience to keep their faith alive and look at the positive side of things.”

Personally, I found the campaign deeply moving and really apt to the times we live in where we mostly hear one bad news after another. This in turn breeds many insecurities and negative thoughts within almost every Pakistani citizen.

Through inspiring Urdu poetry, the “Hai Yaqeen” song in the TVC drew a positive example with every negative one that we face as Pakistanis in our everyday lives.

“At Coca-Cola, we realized there was a pressing need to address this issue, and launched a campaign to shift the focus on all that’s right and the reason to believe in a better/positive Pakistan,” Mr Qadir said while shedding some light on why the campaign was launched and what purpose it fulfilled for the brand.

He first established the gravity of the situation that Pakistan faces.

“Globally, Coca-Cola stands as a beacon of happiness and optimism and has always provided a strong point of view which addresses current societal trends and ignites a new set of beliefs,” he added.

“Through the campaign we intend to project a culture of positivity, refresh optimism and define ‘Yaqeen’ as the catch-phrase which stands for optimism and looking at things positively, i.e. yaqeen in a better Pakistan.”

Lately, Coca-Cola Pakistan has employed a local prism to its campaigns. It was a general observation that majority of Coca-Cola ads in the past were global campaigns.

In some cases, the ads were only slightly tweaked for this region. However, recently more local initiatives, such as Coke Studio and even the “Reasons to believe” campaign which was completely localized were launched.

They stir a sense of optimism and positivity in Pakistani audience and this is exactly what Coca-Cola needed to strengthen its footprint in Pakistan.

“If you look at the major campaigns throughout the year, they are locally developed e.g. Coke Studio, Sprite Cricket Next, and Minute Maid and so on,” Mr Qadir informed while talking about the several original campaigns that were tailor-made for Pakistani market.

“However, The Coca-Cola Company provides its country branches with a campaign framework which is then localized to suit the dynamics of the country the campaign is running for.”

The campaign was executed using multiple media vehicles. While the TVC formed the center stage for the campaign and communicated the key message effectively, the rest of the media vehicles such as print, radio and outdoor were used with equal efficacy to sustain the brand message.