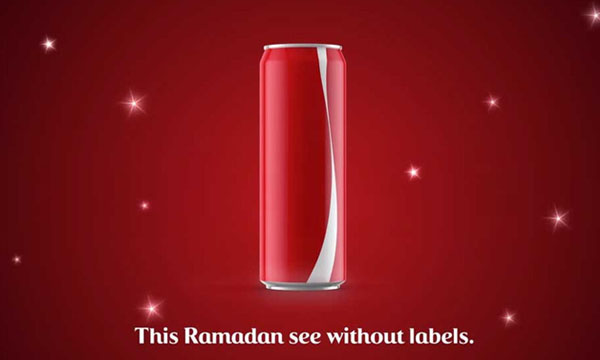 With a bright new zeal to promote global harmony, Coca-Cola has decided to strip off its name on Coke cans as a protest against prejudice prevailing in the planet.

A part of its Middle East Ramadan campaign, the beverage giant has shed away its cursive name to leave behind its ingenuous white ribbon, echoing the message “Labels are for cans not for people.”

Created by Dubai-based agency FP7/DXB, a part of McCann World group, Coke’s campaign “Remove labels this Ramadan” will enable the brand to play a part in the global movement against stereotyping and bias-ness. “In the Middle East, a region with over 200 nationalities and a larger number of labels dividing people, these Coca-Cola cans send a powerful and timeless message that a world without labels is a world without differences,” the agency said in a statement.

In order to tout its new “low -key in design” can’s , Coca-Cola also rolled out a commercial in which a band of strangers from diverse backgrounds bond with each other on an Iftaar table. Immersed in darkness, they try to guess each others appearances only to be surprised how wrong they were as the lights were turned back on.

Claimed as a part of a “social experiment”, the launch of the label-less soda cans have been intentionally timed with Coca Cola’s global promotion “Let’s take an extra second”.

This worldwide campaign is to trigger the thought that while it may take a bunch of seven seconds to form fallacies based on nationalities, culture, religion or appearance; it takes only a mere second to break through them.

Undoubtedly, Coke never falls short to unleash powerful thought-provoking messages via its novel campaigns.  With its “Share a Coke” campaign already making waves globally, its “Remove Labels this Ramadan” initiative will surely be welcomed warmly by its fans all over the Muslim world.