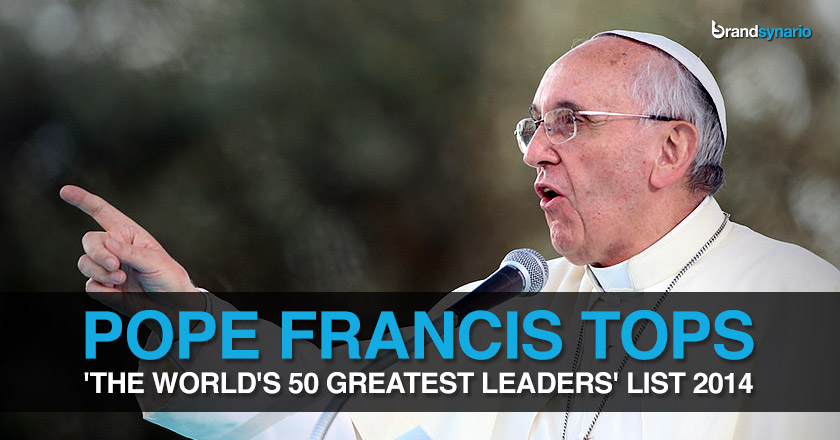 CNN recently published the list for world’s “50 Great Leaders”, highlighting the top 50 inspirational figures from all walks of life.

Our world has witnessed many great leaders over the years, yet there are just a few who are well-remembered globally. These few are no different from others, but the only point of differentiation is “who tries to play his part” and “who plays the blame game”.

Angelina Jolie, the famous Hollywood actress who also made it to the list on 21st rank has been associated with UN since 2000. Angelina started to play her role as humanitarian, serving many as she travels from country to country while visiting places like Syria, Iraq and Pakistan.

U.K’s Foreign Secretary, William Hague who has also worked with Jolie during her humanitarian efforts, admires her in these words:

As the list goes on, we spot the brave Pakistani youth icon Malala Yousafzai on 34th rank. The young lady, 16 at present, is one of the youngest leaders in the world.

5 years ago, Malala stood up against the fearsome Talibans and suffered a bullet head injury. Since then, there has been no stopping her. This bold young lady has become a symbolic icon of inspiration for many around the world, bringing them hope and desire for education.

As we continue to progress down, we come across a well-deserved name at 40th rank, i.e. of Anand Mahindra, the owner of Mahindra & Mahindra group, who operates in one of the most heavily populated and corrupted countries of the world, i.e. India.

The Corporate world of India is ruled by only a handful of affluent families is a very tough place for honest people to be in. Mahindra has not only established Mahindra & Mahindra group fairly within this corruption but he has also integrated honesty to the deepest roots of his company.

An act that has taken 58 years of his life to get accomplished to the point at which Mahindra & Mahindra group stands today.

A complete list of these 50 greatest people by CNN can be found below:

All these leaders have achieved many great things in their lives and irrespective of their cast, creed or color they all deserve one thing, i.e. “RESPECT”.