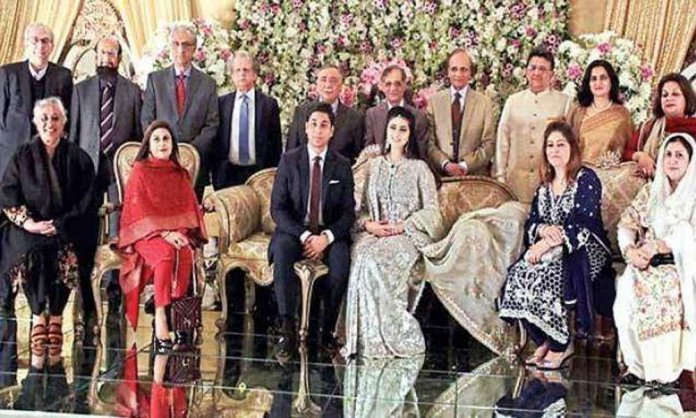 Winter is here and so is the wedding season!

Where our news feeds are flooded with the pictures from the wedding events of various celebrities, we have recently come across the picture from the lavish engagement ceremony of Chief Justice Saqib Nisar’s son, Najam Saqib.

Najam Saqib got engaged to Rida Shehram, the daughter of Lahore High Court Judge, Justice Shehram Sarwar in a grand ceremony in Lahore.

Honorable Justice Tassaduq Hussain Jillani, former Chief Justice of Pakistan, was among the guests along with the incoming CJP Asif Saeed Khosa to attend the event.

A few days back, CJP Saqib Nisar along with his wife was spotted at a wedding event with our veteran actress, Reema Khan.

These pictures from the ‘Rukhsati’ of Barrister Ali Zafer’s daughter are making rounds on the internet.

A colorful & huge gathering attended by the elite of Pakistan. A festive occasion was the “ Rukhsati” of Barrister Ali Zafer’s daughter. Many honorable members of Judiciary of High Courts & Apex Court graced the occasion. Prominent of them all was the Honorable Chief Justice of Supreme Court, Chaudhry Saqib Nisar & his wife.

Some more pictures from the event!