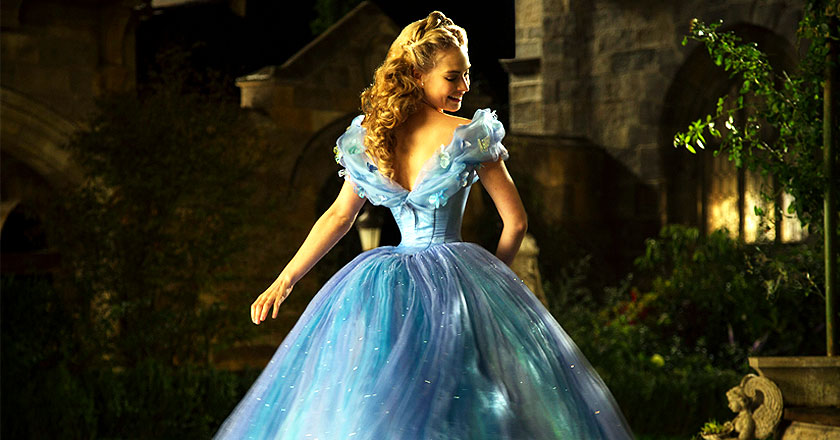 There have been countless versions of the classic fairy tale and Disney’s most popular princess “Cinderella”, including the legendary 1950’s animated magical movie.

This year marks the release of the 13th cinematic adaptation of the celebrated cartoon character Cinderella, taking the die-heart fans of the Fairy Godmother, the Handsome Princess, the little Glass Slipper and the happy ever after ending, to a live-action journey, filled with magic and the 19th century fictional romance.

While the plot of 2010’s “Alice in the Wonderland” and 2014’s remake of Sleeping Beauty in “Maleficent” were revamped and re-imagined, the latest edition of Cinderella remains magical and loyal to its original folk story.

The moment the movie begins, it will take you in its spell and keep you hooked till the end. The soothing music, dazzling dresses, squeaky mice and the chirpy birds all added to Disney’s charming contemporary Cinderella.

The initial 30 minutes will leave you teary-eyed with the heartbreaking scenes of the death of Cinderella’s merchant father, played by Ben Chaplin. But then the plot thickens with the arrival of the evil stepmother Lady Tremaine, played by Cate Blanchett who takes over Ella’s home, along with her two annoying “spoiled brat” daughters, Drizella, played by Sophie McShera, and Anastasia played by Holliday Grainger, while Cinderella herself is played by Lily James.

Lady Tremaine makes the life of her quintessential obedient step-daughter, a living-nightmare. But the pretty as a picture, free-spirited Disney princess, with her hand-me-down long frocks and gush of blond hair, survives everything with a smile.

Then appears on his elegant white horse Richard Madden as the Prince Charming to whisk Cinderella away from the clutches of her wicked step-family. Like in the original tale, he is hunting for a wife and calls for a grand ball.

And what a ball it was! Surrounded by candles, golden statues, magnificent chandeliers and fresh flowers everywhere, the ball’s glorious set will leave you in awe.

Cinderella in her powder blue ball gown, sparkly tiara and glossy glass slipper is quite a worthy sight in the movie. She dramatically floats down onto the arms of the prince for a romantic waltz, making you fall in love with her all over again.

Cinderella’s wacky Fairy Godmother is played by Helena Bonham Carter who too will have you charmed with her “Bibbidi bobbidi boo”. It was even more entertaining to watch her transform the pumpkin into a golden carriage in live-action than in the animated version.

The best part of the 2015’s Cinderella is the performance by evil step mother Cate Blanchett, who with her grand entrance in the movie, achingly beautiful gowns and remarkable venomous acting has apparently overshadowed Lily James’s acting as “Ella”.

Kenneth Branagh‘s new Cinderella is bound to cast a spell on you and is possibly the best of all its versions till date. A round of applause for him for flawlessly pulling together Disney’s classic tale, taking the viewers to a nostalgic voyage of their childhood memories.

Apparently, the $95 million budget movie will continue the legacy of Disney’s winning streaks of converting its traditional animated tales into live-action movies.