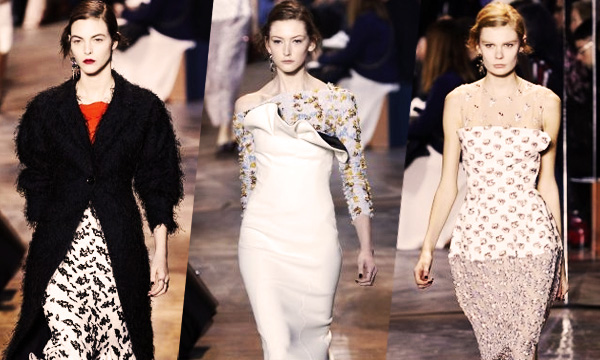 When Raf Simons announced in October that he would be leaving Christian Dior after more than three years as creative director, it was left to the luxury French house’s creative team to pick up the pieces and stitch them into a Spring 2016 Haute Couture collection that would live up to its famous name.

Presented Monday in Paris, that collection struck the perfect balance between the elegant and the risqué, featuring the house’s signature lightness of touch and sensual approach to women’s fashion. The hemlines grew longer, dropping gorgeously to below the knee in an asymmetrical fashion, and skirts teamed with nothing but an open blazer to give the look a raw edge. The designers played with volume, nodding to the current trend for outsized coats with a camel jacket featuring structured sleeves, and a floral midi dress that flared out at the hips before tapering back in along the leg. A midi strapless dress with a stiff ruffled neckline was actually revealed to have full-length sleeves and cold shoulder blouses were given extra structure thanks to the addition of puffball volumes. Frothy hemlines peeked out from underneath sharp outwear for an added dash of fancifulness. Monochrome prints were livened up with bold flashes of color for a modern edge while semi-sheer fabrics gave the collection the dreamy, whimsical air the house does so well. A quick nod to the underwear-as-outerwear trend meant that the final tailored, structured looks did nothing to quash the collection’s magical and very Dior-like effect.

Paris Haute Couture Week 2016: Models To Watch Out For!