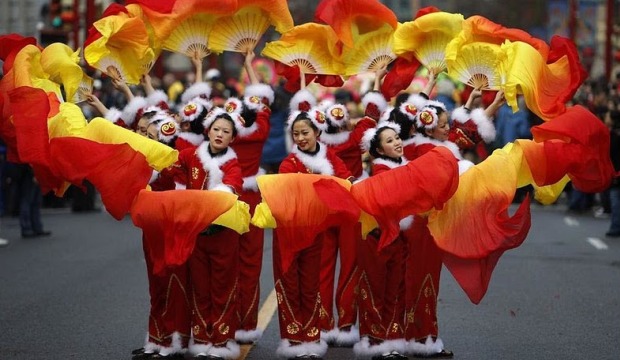 On February 8, the lunar New Year will ring in the Year of the Monkey, or more precisely, the Fire Monkey, a sign that’s associated with ambition and adventure.

Here’s how some of the biggest Chinatowns in the world will mark the occasion.

The British capital claims to be host to the biggest Chinese New Year celebration outside Asia, with a grand parade that starts at Trafalgar Square and snakes its way down to London’s Chinatown. This year, in addition to 10 lion teams leading one of Europe’s biggest lion dances, Trafalgar Square will host stage performances such as traditional dance troupes, acrobats, dragon and flying lion dances, opera and martial arts performances. The program ends with a fireworks show at 5:20 pm.

Festivities for the Chinese New Year last all month long across New York. On February 8, Sara D. Roosevelt Park will kick start the party with a firecracker ceremony. On February 13, residents in Flushing, Queens — a borough that’s twice been named the hottest destination in the US thanks in part to its bustling Chinatown — hosts a boisterous parade. The following day, Manhattan hosts its own party that will march through Little Italy and end in Chinatown. And over in Brooklyn, singers and dancers will entertain locals at Sunset Park.

For 160 years, Melbourne’s Chinatown has been hosting a new year celebration for the community. Leading up to the main event, the neighborhood — aglow in Chinese lanterns — will throw a series of special events that includes outdoor cinemas, street stalls hawking Chinese street food, cultural workshops, martial arts and dance lessons. On February 14, an estimated 70,000 spectators are expected to watch the Millennium Dragon Parade wend its way down Corner Russell and Little Bourke Streets.

Singapore has been in party mode since January, throwing Year of the Monkey events since last month. The celebration continues into March, but will, of course, be punctuated by a Western-style countdown in Chinatown February 7 beginning at 9:30 pm.

The party will feature live performances, songs, interactive games, skits and a fireworks display. The neighborhood will also put on nightly stage show performances of traditional Chinese dance and song and recreate the streets of China with food stalls. Chinatown will remain lit up until March 8. Interestingly, this year Chinese New Year falls on a statutory holiday in the Canadian province: British Columbia Day. Likewise, the parade is scheduled to take place on Valentine’s Day. Vancouver’s Chinatown is the biggest in Canada.