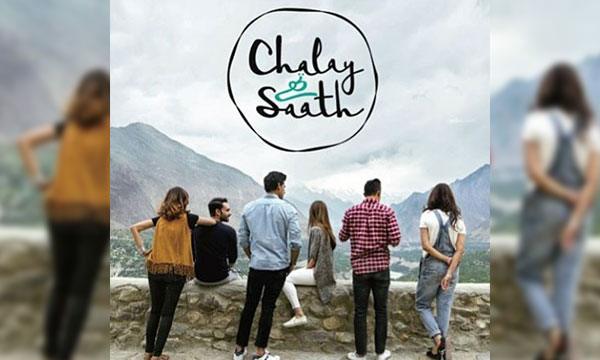 Chalay Thay Saath perfectly encapsulates the haseen scenery of Hunza & Gilgit, the bonds between friends and the love a person holds for their home.

I went in with no expectations and came out with only one:

I must visit the Northern areas of Pakistan ASAP!

Syra Shahroz plays Resham, a young doctor and her best friends Tanya (Mansha Pasha) and Zain (Osama Tahir) have taken time out of their busy lives, to accompany Resham to her hometown near Attabad Lake in Hunza.

Third-wheeling along is Faris Khalid’s character, Faraz and Shamim Hilaly, who plays Aqsa aunty. Aqsa aunty has ‘run away’ from her selfish children and is out to enjoy the beauty of Pakistan on her own (Ye cheez aunty!).

Resham’s love interest Adam, played by Chinese-Canadian actor Kent S. Leung, joins this group from the Chinese cemetery in Gilgit. Zhalay Sarhadi is a female carpenter at the Ciqam workshop. Behroze Sabzwari is perfect as the doting father, who thinks Adam isn’t good enough for his daughter. Incidentally, Behroze is Syra’s real FIL.

Before you go any further, the rest of this review is full of spoilers. So quit reading now, if you want to see the movie for yourself.

The movie begins with a fantastic sequence of Northern Pakistan. A group of Hunza locals is gathered around a bonfire, talking about how human beings are a strange species. Very artsy.

Resham’s first appearance is just minutes later, as she sits in her hilltop home in Hunza.

Resham’s writing in her diary, recounting all the events that led her to this point. Zain & Tanya’s attempts to rekindle their dying marriage. Faraz ditching his friends for a girl he likes. Adam stealing her diary.

Yes, Adam is a diary thief. However, he only does it because he wants to know more about Resham, who has fallen for at first sight. We lovestruck Pakistanis can forgive that, right?

Resham also falls for Adam, despite the fact that they cannot even talk to each other without a translation app. Their cute love story ensues, which will remind you of your teenage crushes.

The first half of the film follows the group as they explore the spectacular scenery of the area, taking in sights such as the Altit Fort, Ciqam carpentry workshop, Attabad Lake and more. Zain and Tanya continue their bickering and fighting.

Faraz & Zain find Adam looking through Resham’s diary and their manhood is threatened by this fact.

Resham defends her man and fights her best friends.

Some slapping, blaming and he said-she said later, Resham is reminded by Tania that she cannot simply choose a guy for herself. Her dad must approve as well.

Faraz leaves the group at this point to follow the woman of his dreams, Zhalay.

Adam finally meets Resham’s dad who immediately sends him out to camp in the front yard because ‘men are not allowed over the doorstep’ unless approved by Resham’s dad. And so Adam must brave the worst to prove his love for Resham.

However, Adam’s mother back in Beijing has an accident and he must leave immediately. He leaves a note which is blown away by the wind. Figures.

Meanwhile, Zain & Tanya are still fighting. Tanya gives up on their relationship and signs the divorce papers, which leaves Zain devastated because he wanted to try again.

Resham assumes the worst after they can’t find Adam and blames her father for being too hard. Cue the absolutely amazing title track of Chalay Thay Saath.

Tragedy strikes when a landslide destroys a nearby town. Resham, her dad, Zain and Tanya hurry to help the victims. However, the nearby Hunza River has overflown its boundaries and Resham’s home is submerged in what is now the Attabad Lake.

Everyone evacuates to the nearby relief camp and a few weeks pass by. Tanya and Zain make up and with the divorce papers destroyed in the water, the two are not officially divorced anymore.

Adam, in Beijing, finally hears about the disaster and hurries back. After quite a few hits and misses, Adam manages to find Resham’s father, who is only too happy to marry his daughter off. The end.

Now, down to the nitty-gritty.

Kent’s funny little act, when trying on a shalwar kameez, is the most hilarious part of the movie.

Mansha is amazing as Tania, making you hang onto every single word she utters. Osama & Faris’ performance makes you think they are chaddi buddies IRL. Whereas, Zhalay’s role is too small to be so dragged out.

The second half of the movie is a drag, with random moments of drama tossed in.

Not enough attention has been paid towards the natural disaster on which this story is based. The Attabad Lake incident could do with some more explaining in the movie.

However, the humorous exchanges between Osama, Faris & Kent more than make up for the misses. They gel well together and their reactions are believable.

Take this for example:

Of course, with the glorious mountainside of Hunza as the background for this film, one can only expect amazing cinematography. There’s something in the scenery which creates an urge to visit and see these spectacular sites for yourself. I, for one, cannot wait to pack my bags and head to Hunza this summer!

I, for one, cannot wait to pack my bags and head to Hunza this summer!

Chalay Thay Saath’s soundtrack is a musical masterpiece. The setting of Hunza to these amazing songs is really something genius.

A fun movie to watch, if you’re bored.

So here’s a summary of what’s good and what’s not:

Here are some pictures from the premiere:

At #chalaythaysaath premiere in nueplex #karachi

This girl can pull off any outfit, she's not only a talented actress but also one of the few models who makes a statement in every appearance. #chalaythaysaath #premiere #ctsthefilm #cts #21stApril #zhalaysarhadi

This couple made us laugh and understand the true value of life. Every strong and independent person will definitely learn a thing or two from their character in the movie! Besides that they both are really good posers and we love them to bits ❤️ #chalaythaysaath #premiere #ctsthefilm #cts #21stApril #zhalaysarhadi #fariskhalid