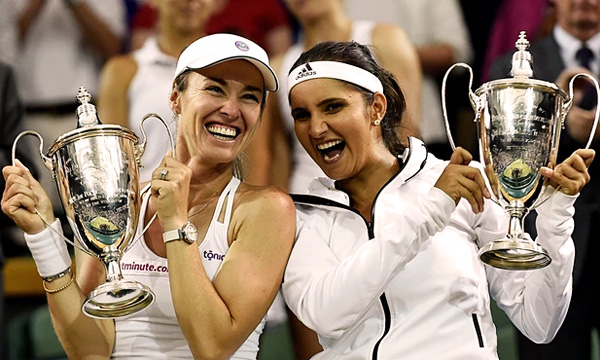 Winning the women’s doubles final of the Wimbledon 2015 in London, Sania Mirza and her partner Martina Hingis makes everyone proud. The whole world appreciated the two talented players.  The duo together defeated Russia’s Ekaterina Makarova and Elena Vesnina at the games.

Celebrating the victory and sharing moment of joy, Sania Mirza posted photo on Instagram about her amazing victory:

Me and my racket are both jumping with joy 🎾🏆👆

Martina Hingis also took it to social media and tweeted photos of the two of them:

Shoaib Malik also tweeted and showed love for his wife on winning the Wimbledon 2015. he tweeted “So proud of her…high level of discipline, focus and big dreams that athletes are made of.”

Not only Indian Prime Minister but Bollywood also praised Sania and her partner sending wishes and extending love. Following are some of the tweets of celebrities appreciating Sania:

Congratulations Sania Mirza and Martina Hingis for winning the Ladies doubles at Wimbledon! Way to go!

And yet again, you make a billion hearts proud!!! Congrats Sania! You are a woman of today’s india! #Wimbledonhttps://t.co/ULYVJQw5Ua

First time at #Wimbledon and super proud of @MirzaSania .. Thankooo for the privilege of watching u on fire #loveher pic.twitter.com/hAAWHdI7iO

Go @MirzaSania ! As always, you make us all proud! Congrats to you and Martina! 🙂 https://t.co/DwjHJiBxc9