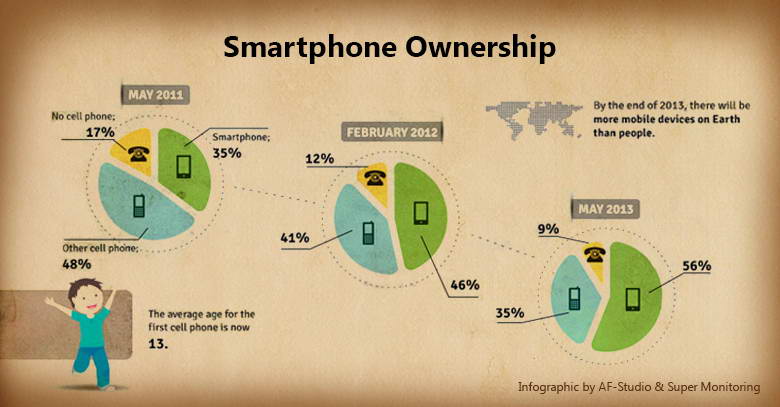 Did you know that by end of this year, there will be more Smartphones in the world than people?

Or that the average consumer-age for the first cell-phone is now 13 – this implies that a great majority owns their own cell phone even before they turn 13 years of age? Imagine the possibilities it generates in the advertising world; the possibility to shape the young minds and make them brand loyals.

A study conducted by Super Monitoring highlighted some interesting facts about mobile usage, ownership and activites.

The implication of this simple fact goes beyond all the previous marketing strategies and brand touch point development. People roam around with an open mode of communication, connected to the gargantuan Internet, open to any kind of promotions.

This is why Smartphone is considered ‘not the future’ but the ‘present’ of modern-day advertising.

In the span of last three years, Smartphones have taken over all other modes of Telecommunication. In 2011, 35% of people used Smartphones – a figure that jumped 11% in one year, when 2012 concluded with a total of 46% Smartphones users in the world.

Following which, in 2013 total smartphone users had consolidated at 56%.

In the last three years, 21% of mobile phone users bought a smartphone, thus reducing the number of people who used other phones by 13% from a total of 48% to 35% and the ‘No cell phone users’ have decreased by 8% from 17% to 9% at present.

As shown above from the info graphic, half of all the people who use smartphone have chosen it as their primary source of going online. Imagine the implications it has on the businesses based on web and its significance on mobile friendly websites.

Majority uses smartphones for Web browsing then follows Games and thirdly and not-surprisingly is Facebook.