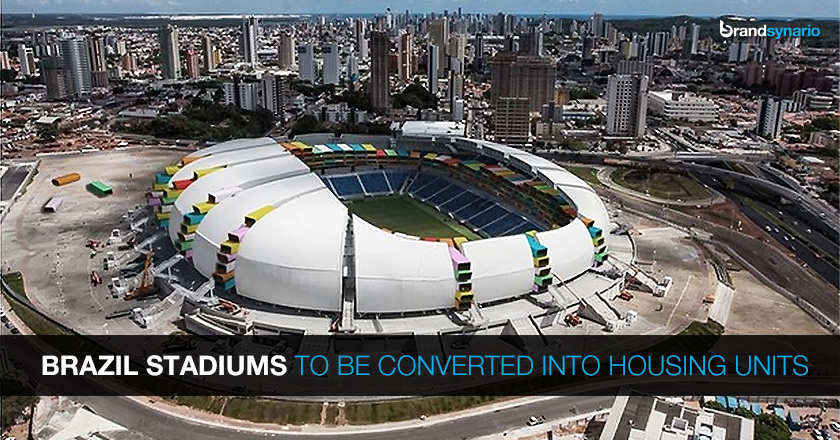 FIFA World Cup 2014 was an exciting event for the Brazilian fans until Germany and the Netherlands kicked the host country out of the tournament.

Long before Brazil suffered this historic heartbreak, its poor natives were already suffering due to the game. Now, the stadiums are just a gloomy reminder of their defeat.

The Brazilian government forcefully demolished more than 100,000 homes of the poor. They were relocated as part of an urban renewal project to attract more athletes, fans and investments into cleared slums.

It makes one wonder-were the $2 billion that were invested into building the 12 stadiums for the worldcup an enormous waste?

This is where the architectural firm, 1 Week 1 Project comes in.

Two French artists, Axel de Stampa et Sylvain Macaux, based in France and Chile have devised a plan under the name of Casa Futebol, to turn the huge, unused stadiums into housing units for the needy.

According to sources, “The concept calls for the design of prefabricated apartment modules of 105 square meters that could be inserted into the periphery of each stadium’s shape, along with “colonizing the outside facade” to give them a different look.”

“The stadiums are so big that it is almost absurd.” –Sylvain Macaux

The fields will not be included in this project to protect the interests of the citizens. So, people can still enjoy the soccer game occasionally.

The four stadiums under the spotlight are; Manaus, Natal, Cuiatå and Brasilia.

There are certainly quite a few questionable aspects of this project; can the stadium bear the weight of the units and its residents? Will people be willing to invest in such a project? We’ll just have to wait and watch.

Area coverage of each housing unit will be 1,130 square feet. However, the average government affordable unit size is 377 square feet.

This brings in another question in mind – Will the project be affordable for the poor? Is this in coordination with social justice or is it another fancy, profit-oriented agenda?