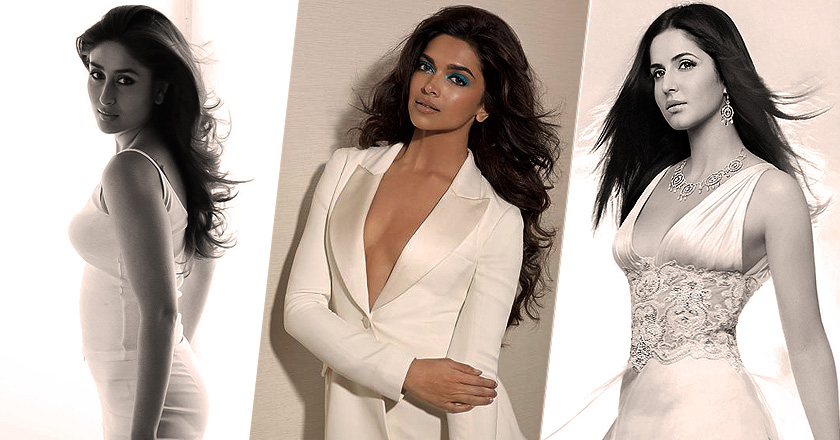 The unpredictable world of Bollywood witnesses the rise and fall of superstars every other day. Celebrities soar high one day, only to plummet down on the very next with just one massive movie flop.

However, there are some favorite faces in the Indian entertainment industry that have been reigning over the B-Land since their debut.

Such a list of celebs was released by Box Office India, rating the most wanted actress in India.

Let’s check out the list of the most wanted actresses of Bollywood. Topping the charts is none other than the B-town’s dusky diva Deepika Padukone. Claimed as the Bollywood Queen of 2015, she has emerged as the most sought actress due to her back-to-back blockbuster movies in the previous years.

The ‘Happy New Year’ girl will be now seen in latest films like ‘Tamasha’, ‘Bajirao Mastani’ and ‘Piku’. Catching up is the sultry Katrina Kaif who has apparently ‘Bang Bang’-ed every other actress out of her way to grab the runner-up spot in our list.

While she was quite absent from the silver screen for the whole of 2014, her ‘Dhoom’ in Bollywood still prevails. Currently, she is busy with her upcoming 2015 projects ‘Phantom’ and ‘Jagga Jasoos’. Kareena Kapoor Khan is seemingly the third choice of the Bollywood directors. In spite of many early flops in the career, she has risen nevertheless to be amongst the leading favorite actresses in the industry.

‘Singham Returns’ remained her only movie last year in a leading role, but she was seen out and about in various celebrity endorsements. Next she will be seen in movies like ‘Bijrangi Bhaijaan’ and ‘Udta Punjab’. Once ruling the Bollywood Kingdom, the actress turned rock-star Priyanka Chopra has now descended on the list to number 4.

However, her latest movie ‘Mary Kom’ gave a boom to her wavering career. The former Miss World will be appearing in an ABC TV series ‘Quantico’ and in Indian movies ‘Bajirao Mastani’ and ‘Dil Dhadkney Do’. Halfway through the list is the bubbly-face Alia Bhatt. In quite a short time she has climbed the ladder of success surprising all of B-town with her sensational acting skills in ‘Highway’.

The young star is all set to dazzle in movies ‘Kapoor and Sons’, ‘Shandaar’ and ‘Udta Punjab’. The ‘Dabangg’ darling Sonakshi is next in line in the most wanted list of Bollywood Beauties.

Her career graph is on a steady pace and has mostly starred in action-packed movies. Her upcoming project ‘Akira’ will unveil her as a tough lady cop in the movie. The ‘Queen’ actress Kangana made her mark in the industry with her very first movie only ‘Gangster’.

She is claimed as the only lady in B-town who has reached the heights of fame without the support of any popular male lead actors. Next in line for the London Thumakda girl is ‘Tanu Weds Manu Returns’ and ‘Katti Batti’. At the bottom of the list, lies the jolly Anushka Sharma. Her latest movie ‘PK’ has been a big blockbuster and a lucky project for her.

Wadi e Jinn: 5 Things To Know About The Spookiest Place In Saudi Arabia