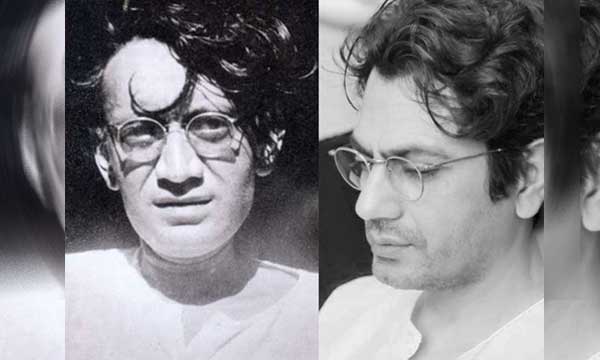 The powerhouse performer, Nawazuddin Siddiqui is making waves in Bollywood! After grabbing eyeballs as ACP Majmudar in Raees,  the actor is all set to portray the role of Manto in Nandita Das’s  iteration of controversial Urdu poet ‘Saadat Hassan Manto’.

Siddiqui shared his first look as Manto on Twitter and we bet it will leave you in awe!

You are bound to find the resemblance uncanny between the two!

The actor has nailed Manto’s unruly hair and round spectacles in the black and white glimpse.

Just see for yourself how the real Saadat Hassan Manto looked! The image even caught Mahira Khan’s attention on Twitter!

Indeed, Nawazuddin Siddiqui is a versatile actor and knows how to do justice to his roles. The star puts his flesh and blood in whatever he does, shining his way ahead in B-town within just a matter of years.

Nandita Das, a prodigal actress, and a director in the Bollywood Industry took the task direct the film ‘Manto’ in India featuring the life of the Pakistani poet. The director of the film also revealed that Irfan Khan will be playing the leading role in this film.

Earlier, Pakistani director Sarmad Khoosat garnered immense praise and received a number of worldwide accolades for his movie “Manto”. It would be interesting to the talented Indian director brings to the fore in the Bollywood biopic.

Nandita Das while sharing her views regarding the idea of showcasing Manto’s life again revealed that the film ‘Manto has already been made and successfully recognized in Pakistan and now the same film convening on Manto’s life line will be flaunted in India.’