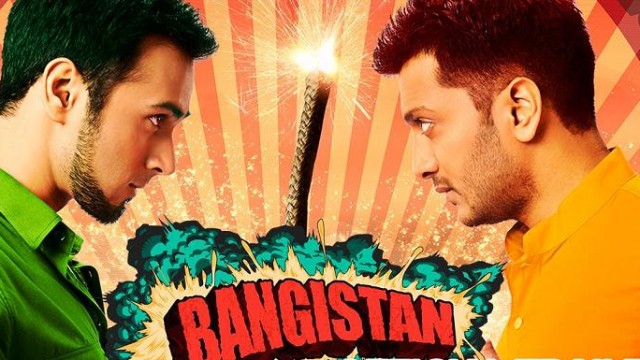 Earlier, Salman Khan starrer Bajrangi Bhaijaan faced hefty issues over its release in Pakistan. While it later got clearance to hit the silver screen in the country, no one could stop BB to take over the box office and it minted a mighty PKR 45 million alone on Eid.

Now another Bollywood movie “Bangistan”  has landed in a similar quagmire, for it has been slated for a ban on screening in Pakistan’s cinemas.

Apparently, the movie has not been granted clearance by the censor board for being an anti-Muslim and anti-Pakistani movie from the looks of its trailer.

Featuring Jacqueline Fernandaz, Riteish Deshmukh and Pulkit Samrat as the lead heros, Bangistan is a satirical saga revolving around the tale of two wanabee suicide bombers Hafeez Bin Ali  played by Riteish and Allah Rakha Khan played by Samrat. The duo gets brainwashed to execute a bomb blast but then eventually deter from their decision due to the frivolousness of the mission.

Watch the trailer of Bangistan here.

With it’s release just a week away, the movie’s producer Ritesh Sidhwani has filed a request to the ministry across the border to review their decision for ban on Bangistan.

“Basing their judgement on the trailer alone, they have decided that the film is anti-Pakistan and anti-Muslim. If anything, it’s anti-terrorism and since Pakistan is as much a victim of this global menace as any other country, it is in their interest to screen the film. It’s message is that it’s foolish to give up your life for a cause you’ll not live to fight for,” says Sidhwani.

Another alleged reason for its ban is being attributed to a desi rap song of Riteish dressed as Osama Bin Laden and Pulkit who turned into Saddam Hussein for a cheeky music video.

Meanwhile the producer and the actors, who are eager to work things out, have also applied for Pakistani visa to visit for a day.

“I’d like to show the film to the ministry and the censor boards to prove that our intentions are fair,” he commented.

Do you think Bangistan should not be screened in Paksitan? Share your views in the comments below