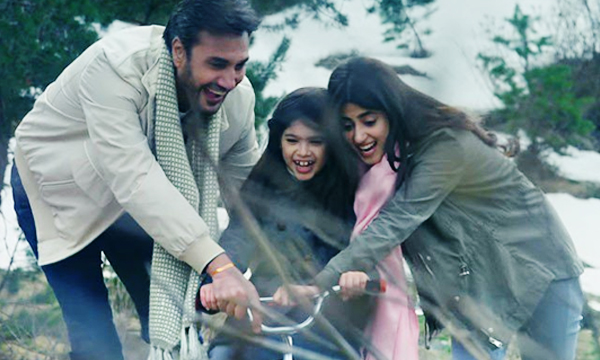 Pakistani actors Sajal Aly and Adnan Siddiqui are gearing up for their upcoming Bollywood debut film, ‘Mom’ starring veteran Indian actress Sri Devi. The movie’s trailer was recently released and ensures that the movie will definitely be on our must watch list!

In a recent interview with an Indian daily, the producer of the film, Boney Kapoor shared his thoughts on the two Pakistani stars that play a vital role in the film and applauded them for their hard work and contribution in ‘Mom’. “We have two very talented actors Sajal and Adnan who are unfortunately not here to promote the film but their contribution to the film is immense.

Boney did not shy away to say that both the Pakistani stars are being badly missed!

“We miss them today, they have given their best for the film and I am sure we all will like what they have done.”

Sajal Aly and Sri Devi on the poster for ‘MOM’!

Due to the on-going restriction on Pakistani artists working in India, it seems like Sajal and Adnan will not be included in the promotional activities held for the movie.

Boney said he has yet to decide about the Pakistani actors being involved in the film’s promotions.

“I have not put my mind on it as we are finishing the film, the post production is on. They worked on the film and their contribution will remain

Looks like our very own Sajal and Adnan have made an impression that will last a lifetime on Boney Kapoor! Mom will be hitting the theaters on 7 July